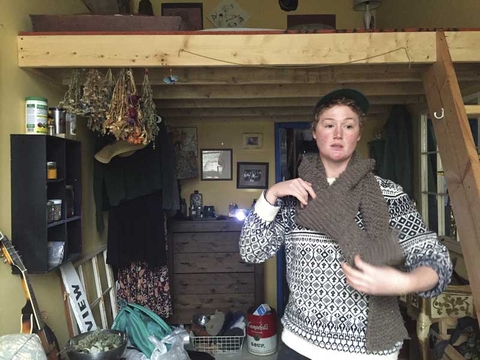 "These places provide a channel for expression. We need to put more resources into creating safe spaces for these people." AP photo. Photo credit: Juliet Linderman.

OAKLAND, Calif. (AP) — As the San Francisco Bay Area's artists grieve the loss of life from a deadly warehouse fire in Oakland that killed 36 people, they are also bracing for a possible city crackdown. The city has vowed to protect artists, but many have voiced concerns and point to Baltimore where officials raided a collective called the Bell Foundry, just days after the fire in Oakland.

Here's what artists in Oakland and Baltimore are saying:

JAY FIELDS, 35, Oakland-based musician went to the Ghost Ship to meet friends but arrived to see it in flames and later learned several of his friends died. The Ghost Ship was particularly unsafe, he said, and not representative of Oakland's diverse art scene that has flourished in old warehouses.

"These places provide a channel for expression. We need to put more resources into creating safe spaces for these people."

Fields echoed the call of Oakland's artists, urging the city not to act hastily and shut the warehouses and evict artists:

"This has already been so tragic and such a huge loss. We have to make something good come out of it," he said. "Don't shut these spaces down. That is exactly the opposite of what needs to happen."

THE LOBOT GALLERY, a sprawling Oakland warehouse arts institution, closed earlier this year after owners raised the rent to the point that artists could no longer afford it in their gentrifying neighborhood. Former LoBot residents issued an open letter to the community after the Ghost Ship fire.

"We are just a few days into a nightmare that is still unfolding," the letter said. "But already people outside of this community are calling for a crackdown on art spaces."

"It is indescribably painful to see the death of our friends being used to attack the form of safety we have built in each other."

NIHAR BHATT, a San Francisco-based DJ is among many artists who have said warehouse spaces must be made safer in a way that does not to take away what makes them special. Playing shows at the Ghost Ship was unique, he said.

"The atmosphere, the lighting, the spaciousness of that upstairs area, it felt like we were in a dream," he said.

If a city crackdown pushes artists out of converted warehouses, they risk going deeper underground to do their art.

EMILY MOORE, 25, moved to the Bell Foundry in Baltimore a year ago from Washington, D.C. "where my life had collapsed," she said. "I lost my job, I lost a relationship, I lost my father, all in a four-month span. The Bell Foundry saved my life."

She got an affordable place to live and a support system until she was evicted this week.

"Coming to a place where you have fifteen friends who can associate with my experience of trauma was incredibly valuable," she said. "Being in a space where there is consistently creative encouragement, political fodder, literature at your disposal, wrapped me up in a world that I couldn't have imagined.

"Having this space uplift creative projects, fantastic minds, gave value to a world that had been devalued throughout my childhood."

PERSON ABIDE, 29, was also among the dozen people evicted from The Bell Foundry. Abide had lived in the warehouse for about a year, moving in after fleeing a violent and discriminatory situation at a previous house. Abide, who is transgender, said the experience has been devastating.

"I'm not unfamiliar with the hostile world that we live in," he said. "That space became, for me, a sanctuary. "

"The Bell Foundry functioned as a safe space for black and brown artists and not artists," he said. "We don't romanticize open rafters. We're not interested in fire hazards. What we're interested in is space that we can get access to."