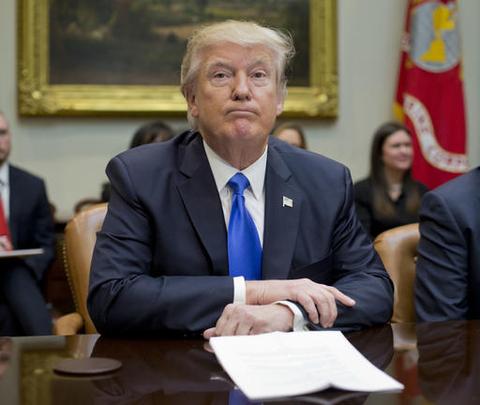 President Donald Trump pauses during a meeting in the Roosevelt Room of the White House. AP Photo/Pablo, Martinez Monsivais.

WASHINGTON (AP) — President Donald Trump warned in a phone call with his Mexican counterpart that he was ready to send U.S. troops to stop "bad hombres down there" unless the Mexican military does more to control them — comments the White House described as "lighthearted."

The White House said Thursday that the comments, in an excerpt obtained by The Associated Press from a transcript of the hourlong conversation, were "part of a discussion about how the United States and Mexico could work collaboratively to combat drug cartels and other criminal elements, and make the border more secure."

The official, who spoke on condition of anonymity because he was not authorized to discuss the details publicly, described the conversation as "pleasant and constructive."

"You have a bunch of bad hombres down there," Trump told Mexican President Enrique Pena Nieto, according to the excerpt given to the AP. "You aren't doing enough to stop them. I think your military is scared. Our military isn't, so I just might send them down to take care of it."

The comments came last Friday in a phone call between Trump and Pena Nieto. The excerpt from the transcript did not detail exactly whom Trump considers "bad hombres," nor did it make clear the tone and context of the remark.

The Mexican government said "the negative statements" reported in the AP story "did not occur during" the call.

The remark offers a rare and striking look at how the new president is conducting diplomacy behind closed doors. Trump's remarks suggest he is using the same bravado with world leaders that he used to rally crowds on the campaign trail.

Eduardo Sanchez, spokesman for Mexico's presidential office, said the conversation was respectful, not hostile or humiliating. "It is absolutely false that the president of the United States threatened to send troops to Mexico," Sanchez said in an interview with Radio Formula on Wednesday night.

The Mexican Foreign Relations Department had earlier told The AP: "The negative statements you refer to did not occur during said telephone call. On the contrary, the tone was constructive."

The phone call between the leaders was intended to patch things up between the new president and his ally. The two have had a series of public spats over Trump's determination to have Mexico pay for the planned border wall, something Mexico steadfastly refuses to agree to.

A person with access to the official transcript of the phone call provided only that portion of the conversation to the AP. The person was not authorized to provide the excerpt publicly and gave it on condition of anonimity.

The Mexican website Aristegui Noticias on Tuesday published a similar account of the phone call, based on the reporting of journalist Dolia Estevez. The report described Trump as humiliating Pena Nieto in a confrontational conversation.

Mexico's foreign relations department said the report was "based on absolute falsehoods."

Americans may recognize Trump's signature bombast in the comments, but the remarks may carry more weight in Mexico.

The latest remarks could undercut that, if Pena Nieto is viewed as "weak," he said.

Trump has used the phrase "bad hombres" before. In an October presidential debate, he vowed to get rid the U.S. of "drug lords" and "bad people."

"We have some bad hombres here, and we're going to get them out," he said. The phrase ricocheted on social media with Trump opponents saying he was denigrating immigrants.

Trump's comment was in line with the new administration's bullish stance on foreign policy matters in general, and the president's willingness to break long-standing norms around the globe.

Before his inauguration, Trump spoke to the president of Taiwan, breaking long-standing U.S. policy and irritating China. His temporary ban on refugees and travelers from seven Muslim-majority countries, aimed at reviewing screening procedures to lessen the threat of extremist attacks, has caused consternation around the world.

But nothing has created the level of bickering as the border wall, a centerpiece of his campaign. Mexico has consistently said it would not pay for the wall and opposes it. Before the phone call, Pena Nieto canceled a planned visit to the United States.

The fresh fight with Mexico last week arose over trade as the White House talked of a 20 percent tax on imports from the key U.S. ally to finance the wall after Pena Nieto abruptly scrapped his Jan. 31 trip to Washington.

The U.S. and Mexico conduct some $1.6 billion a day in cross-border trade, and cooperate on everything from migration to anti-drug enforcement to major environmental issues.

Trump tasked his son-in-law and senior adviser, Jared Kushner — a real estate executive with no foreign policy experience — with managing the ongoing dispute, according to an administration official with knowledge of the call.

At a press conference with British Prime Minister Theresa May last week, Trump described his call with Pena Nieto as "friendly."

In a statement, the White House said the two leaders acknowledged their "clear and very public differences" and agreed to work through the immigration disagreement as part of broader discussions on the relationship between their countries.