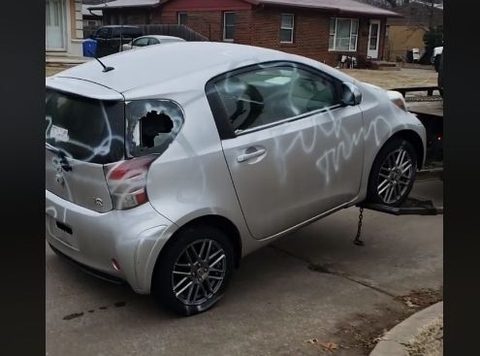 “Fuck Trump” was sprayed on the side of a Wichita man’s car. Photo provided.

Jason Arrambide, 47, of Wichita, Kansas says his property was destroyed because he is a President Trump supporter. The Wichita resident says paint was sprayed on the exterior of his car, windows were broken, and the engine was destroyed when vandals dumped paint down the gas tank of his 2014 Scion IQ.

“A lot of people think that I am odd to be gay and support Trump,” said Arrambide who believes the incident occurred because he had Trump stickers on his car.

Arrambide lives in north Wichita, and the car he “loved” was totaled. There were no witnesses to the crime, and no surveillance video is available of the incident which occurred on February 3.

“We are going to add surveillance to our house due to this,” he said. “It has put us in a very traumatic state. I feel as if I must look over my shoulder all the time, and it makes me feel less than the human I once was.”

He reported the incident to the Wichita Police Department and his insurance company. The insurance company “would not let him” purchase a car “exactly” like his, which he found in another state.

“They said they would just give me a check for the car. They gave me half of the price of my car.”

Upset, Arrambide told them he was going to contact the Insurance Commissioner.

“It's the smallest four-seater car in America. I bought it brand new it gets 38 miles to the gallon, and it is absolutely fabulous. I loved that car.”

He is thankful he was not physically hurt, but he says there are emotional scars.

“I should not have to feel this way,” he exclaimed. “I do not like it! Once again it brings back old ghosts.”

Arrambide said for many years he had been ridiculed and judged, particularly for being gay. At one point he was told he was going to hell for being gay.

At his job, he has been referred to in vulgar anti-gay slurs by customers. He said one day he finally defended himself when an incident occurred at his job.

“For the first time in my life, I stood up for myself. I literally stopped in mid-step, I turned and looked at him, and I said, ‘excuse me’ in a very loud, bitchy manner.”

Arrambide said the man instantly said, “just go back to work.” But others came to Arrambide's aide.

“I was standing there in the middle dining room ready to do what I had to do to stand up for myself. For the first time in my life, I had people standing up for me.”

He said his manager, other staff, and customers stood up for him that day.

When the damage happened with his car, Arrambide posted info about the incident and a video on his social media.

“One individual made me feel like it was my fault, and for some reason, I do feel like it's my fault; that's the part I don't like! Why do I have to feel like I'm the blame?”

On his Facebook page, people posted many responses. One person asked, “Why would you have Trump stickers on your car to begin with? … If I had a Trump sticker on my car, I wouldn’t be surprised at all if it happened to me.”

Arrambide said he had a similar incident occur nearly 20 years ago for having gay Pride stickers on his car.

Soon after Arrambide awakened on the morning of February 3, he called the Wichita Police Department to make a report. He said he has no idea who did the damage.

“I feel like most of my life I've been targeted because I am gay, the way God made me. I just recently this year started feeling comfortable about my gayness. Like I could be who I wanna [sic] be.”

He went on to say, “Nobody knows what it's like to be in Donald Trump's shoes and until somebody can place themselves in his shoes, and they shouldn't be so quick to hate. That is the way God made him.”
Arrambide went on to say, “We are to love. Even if somebody doesn't care for him, they still have to give respect! He is the President of the United States. I don't understand where this lack of respect has its place in America.

“I was brought up to always respect people; my mother, my father, my grandparents, aunts, uncles, school teachers, police officers and the pastor. And definitely to respect another person’s property.”

He shared a story about a video of a man attacking somebody in a restaurant because he was wearing a certain hat.

“Are you kidding me? America has lost its respect so much that literally somebody can be attacked because they wear a certain hat, or somebody's car can be physically damaged beyond repair because they have a bumper sticker?

“What is America coming to?”

If you would like to help Arrambide with some out of pocket expenses, click here to his GoFundMe page.

Below is just a few of the responses Arrambide received on social media.