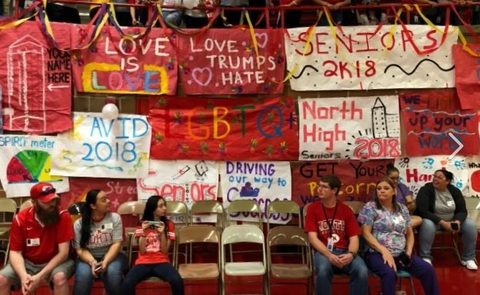 Students decorated the campus in rainbow colors in support of Stephanie Byers, a band and orchestra director who recently was named national Educator of the Year by the GLSEN.

Members of Westboro Baptist Church announced earlier this week that they planned to protest outside Wichita North High School on Friday at 3:00 p.m. The group, known for its use of inflammatory speech and picket signs, is widely known as a hate group. 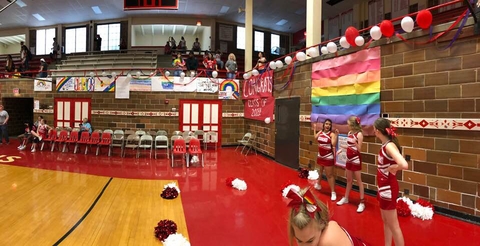 Byers made a statement encouraging students to refrain from counter-protesting, "My friends, wake up and realize how Westboro Baptist Church works. They know what protections local law enforcement is required to provide. They count on counter-protesters to show up. They already know when they will be leaving. The same time with or without counters.

"They bait and goad the counters into action against them. They video it. They then sue the local government for failing to provide proper protections. Sometimes they sue the counter-protesters. They usually win these lawsuits and use the judgment monies to fund their other protests."

She continued, "How do you think a church of 70 members is able to spend $300,000 per year on transportation? Your counter-protest doesn't’t shout them down. It gives them standing to bring a lawsuit and further fund their hate. Don’t play their game!"

The students at Wichita North High School instead drowned out WBC's protest with a celebration of their own. 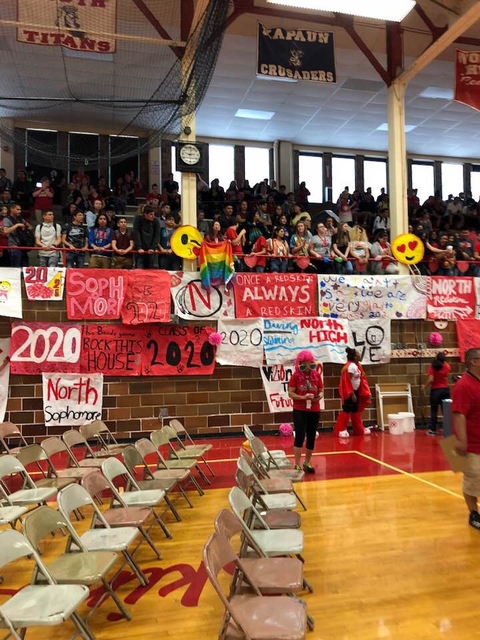 The north part of the building was transformed with signs and bright colors.

At the end of each school year, the seniors at Wichita North High School toilet-paper the campus near 13th Street and Waco to celebrate their last day as high school students.

This year, students chose to celebrate the tradition with a rainbow-colored spin in response to the hate group planning to protest their campus.

The students are unlikely to see any of the WBC protest, Byers' said, "There’s about 50 yards between the building and the South Boundary which is the only place of city easement they could access."