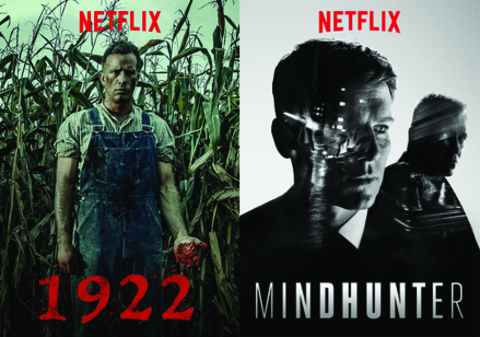 1922:  There are far too many Stephen King adaptations that simply fizzle and fail, but this from one of his novellas is not one of them. Wilfred James (played skillfully by Thomas Jane) is a hard-working Nebraska farmer with a wife (Molly Parker). The two want more, so they plan to sell their land to move to the big city.

The pace is careful and beats down persistently like the sun on the plains as Wilfred plots with his son a murder most foul. Once the gory and horrific deed is done and the body buried (perhaps?) the terrors begin unfolding. The father and son try to grapple with their consciences and each other.

Over the years Wilfred watches the decay of the material things he told himself he murdered for and the metaphors of rot pursue him and his son in the form of rats invading their suffering lives and deaths. Even love cannot save them from what is tracking them.

The story is told from Wilfred's point of view through his confession letter and views the harrowing and haunting visitations from his dead wife as he becomes convinced of her death grip of revenge.

Director Zak Hilditch understands the dark power of a well-made horror film and so takes great care in providing the right, rural Gothic atmosphere for festering guilt to gradually eat away at the characters' doomed souls.

It is a goodie to consume from Netflix during the shivering depth of winter.

Mindhunter: Some studies have indicated that binge-watching may cause viewers to enjoy shows less than viewers watching episodes daily unless the series has been made or designed for binging.

Director and Executive Producer David Fincher seems to understand that difference. He’s always had the stylistic panache to make us keep watching. This time there is a nuanced mash-up mix that truly sets the work apart.

It is too simple on the surface to describe it as revolving mostly around two FBI agents in the 1970's. They are developing the science of profiling serial killers by interviewing those in custody and applying what they learn to open cases.

What grew on me while viewing was the buddy dynamics that have original and creative quirks but simultaneously seem to reference back to Dragnet, The X Files, and a dozen other memorable cop partnerships.

There is stellar casting of Jonathan Groff and Holt McCallany as the FBI interrogation specialists touring the nation's prisons to learn from interviews. Casting accelerates to remarkable with the likes of Cameron Britton as the infamous Edmund Kemper. Adding Anna Torv (remember her from Fringe?) to the team as the civilian ivory tower prof to help develop theory is perfect as well.

Narcissism and sexism dance in and out and even though this is a detective show it still explores and widens the genre fully to break through old norms and emerge with an addicted fan base craving the next season.