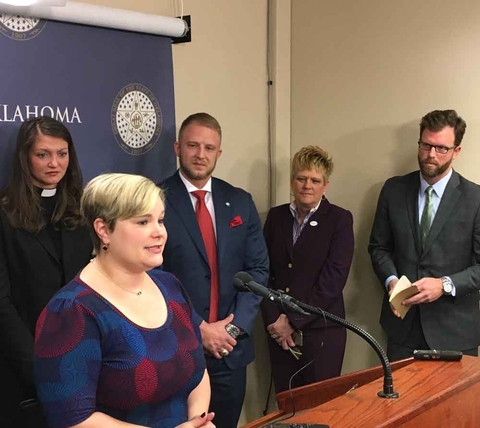 Freedom Oklahoma Executive Director Troy Stevenson said this morning, “For the third year in a row there are multiple anti-LGBTQ bills put forward in the legislature, but first I want to make this clear, unlike other years, there are only three of the 149 sitting legislators who have put these bills forward. It is not the entire legislature.

“It is a small cabal started by [Sen.] Joe Silk, then [Sen.] Josh Brecheen and Rep. Chuck Strohm. I promised members of the legislature that I would  call their names out, because the rest of their colleagues don’t want their names attached to these bills.”

Leaders of Freedom Oklahoma, the ACLU, and Planned Parenthood Great Plains, as well as three state Representatives gathered at the Oklahoma state capitol building Monday morning to highlight for citizens several anti-LGBTQ and anti-women’s choice bills that have been introduced in the state legislature.

“We are calling on those three legislators to pull these bills this week, before the session starts,” Stevenson added.

There are 11 anti- choice bills proposed in the legislature. Tamya Cox, Regional Director of Planned Parenthood Great Plains (PPGP), said, “This session PPGP is prepared to fight the 11 pre-filed anti-abortion bills that threaten the constitutional right of women, men and families in Oklahoma. The state of Oklahoma cannot afford to wage ideological attacks that will result in costly court battles. We guarantee that any and all attacks against PPGP patients and their constitutional rights to safe, legal abortion will be challenged to the greatest extent of the law.”

Also speaking about abortion rights, Ryan Kiesel, Executive Director of the ACLU of Oklahoma, said, “Sen. Silk’s bill is one of the most extreme anti-choice bills in the country, in fact it’s one of the most extreme imaginable. His attempt to ban abortion completely and treat doctors as murderers is in direct defiance of over four decades of court precedent  that guarantees access to reproductive healthcare, including the right to access safe and legal abortions.”

“Attempts to use religion as a weapon to discriminate against your fellow Oklahomans must not ever be tolerated, and they must not be confused as being part of the First Amendment rights that we all enjoy,” Kiesel continued. “Weaponizing religion as an excuse to push away Oklahoma’s most marginalized people is an expression of bigotry, not religious freedom. Every person in this country, every person in this state, is entitled to their freedom of religion, but they do not enjoy the freedom and ability to discriminate against their fellow Oklahomans.”

State Rep. Emily Virgin (D-Norman) said, “What have these bills gotten us? They have gotten us national embarrassing attention, they have marginalized a large portion of Oklahomans, and I receive every day contacts from citizens who tell me that they don’t feel represented by the Oklahoma legislature. They feel represented by a few of us, but not the body as a whole.

“I would like to echo what Ryan Kiesel said about those young LGBT kids in small communities, who need someone to tell them that we represent you, and we are not trying to marginalize you, and the young girls who deserve to know that we are not a misogynistic body, despite what some legislators would have you believe.”

Rep. Jason Dunnington (D-Oklahoma City) “I want to make very clear that the bills we are talking about today are both unnecessary, but mean spirited. Oklahomans across the state have elected us to govern with wisdom and with maturity, and these bills do neither of those.

“One thing that we know from studies…across the United States show that when leaders reduce the signs of prejudice that people are less likely to discriminate. It means that it is more important than ever for those of us in elected office to lead by example. To lead with wisdom, to lead with maturity. It’s our job as leaders to stand up and say that these kinds of unnecessary and mean-spirited bills don’t need to take place and that when we do that, people will follow our lead.”

Rep. Collin Walke (D-Oklahoma City) spoke briefly, saying, “These bills, especially these religious freedom bills, are irresponsible. I knocked on approximately 15,000 doors in my last election, and repeatedly, from Democrats, Independents, Libertarians and Republicans alike, I continuously got this phrase: ‘How many times are we going to fight and spend taxpayer dollars on unconstitutional legislation here in this state?’

“And they sent me to this office in order to fight these very bills, and that’s what I intend to do. These bills are not only fiscally irresponsible, they are morally irresponsible… I’ve asked for them to withdraw these bills.”