2018 Oklahoma legislative session: Should the LGBT+ community be concerned? 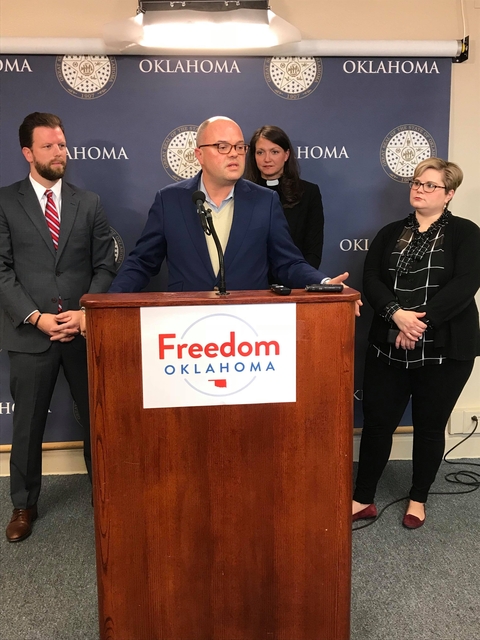 Freedom Oklahoma held a press conference ahead of the legislative session to address LGBT+ legislation. Photo by Robin Dorner.

“We’re really excited because we have the hate crimes bill that Representative Dunnington proposed [HB3148] that’s pro-LGBT,” said Troy Stevenson, executive director of Oklahoma’s LGBT+ advocacy organization, Freedom Oklahoma. “And we’ve got several HIV/AIDS bills that are either for education or decriminalization.”

Stevenson said he worked directly with legislators on the pro-LGBT bills. “The hate crimes bill was a direct request from us. It also adds military status and several others to update the current hate crimes bill.

There have been six anti-LGBT+ bills proposed. “Because there are so few negative bills, we think they might try some committee substitutes and things like that.”

A committee substitute is a revised version of legislation proposed for consideration or adopted by a committee. In other words, the additional language could be added later to bills.

There “are several” bills which weigh against members of the LGBT+ community looking to adopt children.

“It gives religious organizations the right to discriminate against several groups of people, but mainly LGBT people.”

Stevenson said these bills are proposed, but when the legislators consider the harm that can be done, they take a second look and often a different approach.

“If it’s going to hurt kids they usually work it out. Once you show the lack of [adoptive] parents, none of these legislators want to hurt kids. I mean, do you want them with a happy family who has been vetted by DHS? And DHS is begging for these families to be able to adopt. There are many thousands of kids out there who need to be adopted and you have [same-sex] families of means that can give them a good life.”

Stevenson said many legislators work with Freedom Oklahoma in legislation helpful to the LGBT+ community. For those across the aisle, he said it takes education.

“We show them what it is that is bad in the bills. Most of them can see what the bills can do to hurt the state of Oklahoma, especially legislators who have held other public office. They get it on a different level.

“For the new ones, it’s a hard learning curve.”

The Oklahoma 2018 regular session begins Monday, Feb. 5. To track bills as they make their way through the legislature, visit www.oklegislature.gov and enter the bill number under “Find legislation.”

HB2534 – Introduced by Walke. Prohibits employers from discharging or discriminating against an employee for inquiring or discussing his or her wages with a fellow employee. It increases the penalty for those found in violation of that requirement.

HB3114 - Introduced by Proctor. Prohibits any person, partnership, corporation, limited liability company or legal entity of any kind that contracts with the State of Oklahoma and accepts tax credits or tax incentives of any kind from terminating an employee based on sexual orientation.

HB3148 – Introduced by Dunnington. Prohibits the malicious intimidation or harassment of a person based on sexual orientation or gender identity.

HB3486 - Introduced by Ford. Expands the scope of crime related to certain acts related to sexually transmitted diseases. The bill establishes exemptions. It reduces the crime from a felony to a misdemeanor and reduces the penalty from five years imprisonment to imprisonment in the county jail for up to one year, a fine of $1,000 or both.

SB0943 - Introduced by Floyd. Requires individual income tax and corporate income tax forms for tax year 2019 and beyond contain a provision to allow a donation from a tax refund for the benefit of the Oklahoma AIDS Care Revolving Fund. It requires money donated to be deposited in the Oklahoma AIDS Care Revolving Fund created by the bill. The bill appropriates money from the fund to the Department of Health to provide grants to the Oklahoma AIDS Care Fund for purposes of emergency assistance, advocacy, education, prevention and collaboration with other entities. It establishes procedures for a taxpayer to request a refund.

SB1105 - Introduced by Griffin. Requires each school district to provide age-appropriate instruction about HIV, AIDS and related issues and establishes requirements for teaching such subjects. The bill repeals the section of law relating to AIDS prevention education.

SB1527 – Introduced by Floyd. Makes it unlawful for an employer to discharge or in any other manner discriminate against an employee because the employee has inquired about, discussed or disclosed the wages of the employee or another employee with someone employed by the company.

HB2673 - Introduced by Strohm (Shell). An Act relating to adoption; creating the Adoption Act of 2018; providing for noncodification; and providing an effective date.

HB2680 - Introduced by Strohm (Shell). An Act relating to bathrooms; creating the Bathroom Guidelines Act; providing for noncodification; and providing an effective date.

HB3486 - Introduced by Jordan. Prohibits any private child-placing agency from being required to perform, assist, counsel, recommend, consent to, refer or participate in any placement of a child for foster care or adoption when the proposed placement would violate the written religious or moral convictions or policies of the agency. It prohibits the Department of Human Services from denying licensure application, renewal of a license or to revoke the license of a private child-placing agency because of the agency's “religious or moral convictions.”

SB1223 - Introduced by Breechen. Creates the Oklahoma Privacy Accommodation Act and defines related terms. Relates to privacy within public-school building accommodations. School districts must provide a “reasonable accommodation” to any student who for any reason is unwilling or unable to use a multi-occupancy restroom or changing facility designated for the student's sex. During out of town school-sponsored events, restrooms must be clearly designated by sex and used only by persons of the designated sex. Bill authorizes Oklahoma Attorney General to intervene in any legal proceeding to enforce the provisions of this act and will represent any school district or employee named as a defendant therein. The bill also outlines legal procedures for aggrieved persons.

SB1250 - Introduced by Breechen. Creates the Protecting Freedom of Conscience from Government Discrimination Act. The bill states the sincerely held religious beliefs or moral convictions protected by the act are the belief or conviction that marriage is or should be recognized as the union of one man and one woman; sexual relations are properly reserved to such a marriage; and the terms "male" or "female" refer to an individual's immutable biological sex as objectively determined by anatomy and genetics at time of birth. Much more included about “religious freedom” with regard to renting, leasing, refusal of goods and services regarding their religious definition of marriage (photography, poetry, videography, disc-jockey services, wedding planning, printing, publishing or similar marriage-related goods or services or floral arrangements, dress making, cake or pastry artistry, assembly-hall or other wedding-venue rentals, limousine or other car-service rentals, jewelry sales and services, or similar marriage-related services, accommodations, facilities or goods), employment, foster care, adoption, medically treating someone, counseling and school bathrooms (sex-specific standards or policies concerning employee or student dress or grooming, or concerning access to restrooms, spas, baths, showers, dressing rooms, locker rooms, or other intimate facilities or settings).

Further, it permits any person employed or acting on behalf of the state government who has authority to authorize or license marriages, including, but not limited to, clerks, registers of deeds or their deputies, to seek recusal from authorizing or licensing lawful marriages based upon or in a manner consistent with a sincerely held religious belief or moral conviction. The bill requires any person making such recusal to provide prior written notice to the Administrative Office of the Courts, and it prohibits the state government from taking any discriminatory action against that person wholly or partially based on such recusal.