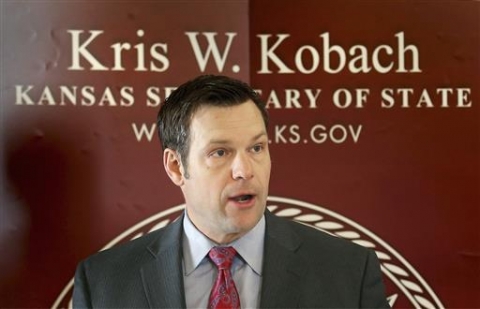 WICHITA, Kan. (AP) — The American Civil Liberties Union filed a class-action lawsuit Tuesday seeking to block a Kansas election rule that could throw out thousands of votes in state and local races by people who registered at motor vehicle offices or used a federal form without providing documents proving U.S. citizenship.

The temporary rule, sought by Republican Secretary of State Kris Kobach and approved last week by the State Rules and Regulation Board, will count votes only for federal races by that segment of new Kansas voters through Nov. 8, the date of the general election.

It comes in response to a federal judge's recent decision that voters do not need to show citizenship papers to register for federal elections as required by a 2013 Kansas law.

If allowed to stand, thousands of Kansas voters will be denied their right to vote in state and local elections in a year when all 165 seats of the Kansas Legislature are up for election, the ACLU argued in its lawsuit.

As of this month, it would affect about 17,000 people who registered at state motor vehicle offices but didn't provide proof of citizenship, though as many as 50,000 prospective voters could be affected in the November election.

In addition, the lawsuit seeks to restore full voting rights to another 383 Kansas residents who used a federal form to register. Among that group is Marvin Brown, a 90-year-old Army Corps veteran who is a plaintiff in the lawsuit.

"My family has been in Kansas since about 1850," Brown said. "It's wrong that a bunch of so-called leaders would tell me that I have to show a bunch of extra documents before I can vote. As a military veteran who fought to protect our democracy, it's particularly offensive."

Kobach's office emailed a written statement, in which it called the case the "latest frivolous ACLU lawsuit" attempting to knock down the state's proof of citizenship law.

The conservative Republican has championed the proof-of-citizenship requirement as a way to prevent voting by noncitizens. But critics of the law contend voter fraud is not a problem, and say the requirement suppresses voter turnout, particularly among young and minority voters.

Temporary rules are allowed without public comment if an agency, such as Kobach's office, sees quick action as necessary to preserve "the public peace, health, safety or welfare."

Under the policy, affected voters will receive provisional ballots, which election officials will examine later to count their votes for president, U.S. Senate and Congress but not for state and local races or local ballot questions.

A state court concluded in January that such "post-vote editing" violates the secrecy of the ballot and that Kobach doesn't have legislative authority to create a dual system, the ACLU noted in its lawsuit.

The Kansas proof-of-citizenship law has been at the center of multiple lawsuits. In May, U.S. District Judge Julie Robinson ruled that federal law allows people who register at motor vehicle offices to cast ballots in federal races, regardless of whether they've met Kansas' proof-of-citizenship requirement.

Alabama, Arizona and Georgia have similar registration requirements on the books, but Alabama and Georgia are not currently enforcing their proof-of-citizenship law. Arizona does not require additional citizenship papers from people registering at motor vehicle offices.