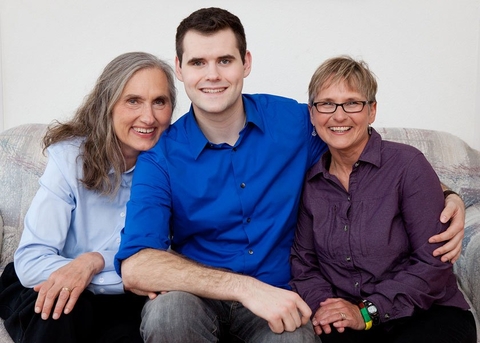 Zach Wahls with his two moms, Terry Wahls, left, and Jackie Reger, in their home in Iowa City, Iowa. Photo by Jenn Ackerman for People Magazine via CNN.

(CNN) -- Zach Wahls, an activist for LGBT+ rights who rose to prominence for a viral speech defending marriage equality and his same-sex parents, claimed victory in the Democratic primary for an Iowa Senate seat on Tuesday.

In 2011, Wahls made an emotional appeal to Iowa lawmakers as the Legislature weighed the possibility of a constitutional amendment that would ban same-sex marriage.

"My family really isn't so different from yours," he said at the time, telling lawmakers he was raised by two women. A video of that speech has been viewed more than 3 million times.

At the time of the speech, Wahls was a 19-year-old student at the University of Iowa. Now he is 26, putting him on track to become one of the state's youngest lawmakers if he wins in November.

After winning nearly 60 percent of the vote in his primary, Wahls is expected to advance to the November general election for a state Senate seat representing Iowa's 37th District. He is set to face off against libertarian candidate Carl Krambeck.

"When I delivered my speech defending same-sex marriage back in 2011, I had no idea it would one day lead me back to the Iowa legislature," he said in a statement on his victory, adding, "our campaign marks a new generation of leadership in Iowa politics."

Wahls has continued his activism in support of LGBT+ rights since giving his now-famous speech.

In 2012, he spoke at the Democratic National Convention and took aim at then-Republican presidential candidate Mitt Romney.

"Mr. Romney, my family is just as real as yours," he said at the time. "I think every child deserves a family as loving and committed as mine."