For advocates of gay adoption, progress but also obstacles 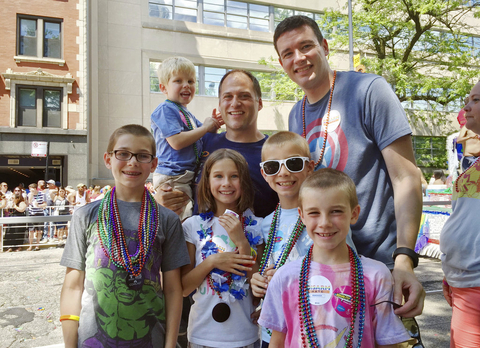 With tens of thousands of children lingering in foster care across the United States, awaiting adoption, Illinois schoolteachers Kevin Neubert and Jim Gorey did their bit. What began with their offer to briefly care for a newborn foster child evolved within a few years into the adoption of that little boy and all four of his older siblings who also were in foster care.

The story of their two-dad, five-kid family exemplifies the potential for same-sex couples to help ease the perennial shortfall of adoptive homes for foster children. Yet even as more gays and lesbians adopt, some politicians seek to protect faith-based adoption agencies that object to placing children in such families.

Sweeping new measures in Texas and South Dakota allow state-funded agencies to refuse to place children with unmarried or gay prospective parents because of religious objections. A newly introduced bill in Congress would extend such provisions nationwide.

For those who support gay adoption, it's a good news/bad news story. Gays and lesbians have ever-expanding opportunities to adopt, and a strong likelihood of finding community support if they do so. Yet bias against prospective gay adoptive parents remains pervasive, whether it's overt or subtle, and experts in the field say many thousands of gays and lesbians are dissuaded from adopting for fear of encountering such bias.

"Some of these agencies are quite clear that they don't work with certain sorts of people," said Currey Cook of the LGBT-rights group Lambda Legal.

Some would-be gay adopters seek out other agencies, Cook said. "But some people think, 'I'm not going to risk being stigmatized and turned away, so I'm not going to step up at all.'"

There's no official, up-to-date count of gay and lesbian adoptive parents, but the number is on the rise.

Same-sex couples are nearly three times as likely to adopt as heterosexual couples, says Gary Gates, a specialist in LGBT demography. His latest analysis of Census Bureau data indicates that in 2015, the year same-sex marriage was legalized nationwide, 44,000 adopted children were being raised by 28,000 same-sex couples. That number of children was double his estimate from 2013.

"If you have financial means, you can find providers who are welcoming and inclusive and help you through that process," said Ellen Kahn, who oversees youth and family programs for the Human Rights Campaign, a national LGBT-rights group.

She says problems often arise when gays and lesbians seek the less costly option of adopting out of foster care, given that many placements are handled by faith-based agencies under contract with child-welfare departments.

Kevin Neubert and Jim Gorey avoided such problems when they pursued adoption out of foster care after calculating that a private adoption might be too costly.

Following night classes to qualify as foster parents, they agreed in December 2011 to provide a temporary home for a newborn baby. A stay intended to last only a few days was extended into several months, and Neubert and Gorey learned that the baby had four older siblings in foster care.

Initially, the two men considered adopting three of the children, and eventually decided to adopt all five, a process finalized in June 2014. The youngest, Derek, is 5; the eldest, Luke, is 12. There are two other brothers, 10 and 7, and a middle sister aged 9.

Neubert and Gorey, who married in 2010 and live in the Chicago suburb of Naperville, said the family has enjoyed strong community support, though shopping trips could be a spectacle. "We didn't know if people were looking at us because we're two guys with kids, or because we had so many kids in tow," said Gorey.

The path to adoption was bumpier for Dr. Christopher Harris, though by some measures he was an ideal candidate when he first pursued that goal 17 years ago in Nashville, Tennessee. He was a pediatrician and faculty member at Vanderbilt University, but also was single and openly gay.

For more than a year, he worked with a church-affiliated adoption agency, taking parenting classes, submitting to home visits. Yet his application never progressed, and he finally deduced it was because he was gay. He reached a similar dead end with a second agency, which took fees from him and only later said it wouldn't place children with single men.

"It was frustrating for me to get passed over," Harris said. "As a pediatrician, I look at the science and see there are no data that children raised by gay and lesbian parents don't do well."

He persisted, finally finding an agency that connected him with a woman open to having her soon-to-be-born child adopted by a gay man. The baby, Maria, was born in November 2002, and soon adopted by Harris. Father and daughter now live in Los Angeles; Maria recently completed her first year of high school.

More than 100,000 U.S. foster children are waiting to be adopted, and child welfare officials struggle to find enough qualified adoptive families. Some jurisdictions recruit gays and lesbians to adopt, but agencies that shun gay clients operate in most states.

Catholic Charities, which does child-welfare work nationwide, says it seeks to ensure that the children it places in adoptive homes "enjoy the advantage of having a mother and a father who are married. "

Bethany Christian Services, which provides adoption and foster-care services in more than 30 states, says its religious principles preclude serving same-sex couples directly, but it routinely refers them to LGBT-supportive agencies.

"When we meet with them, we're very respectful," said Bethany's president, Bill Blacquiere. "We want them to have all the rights any citizen has, including the right to be adoptive or foster parents."