All those debates: Reality TV for the political masses 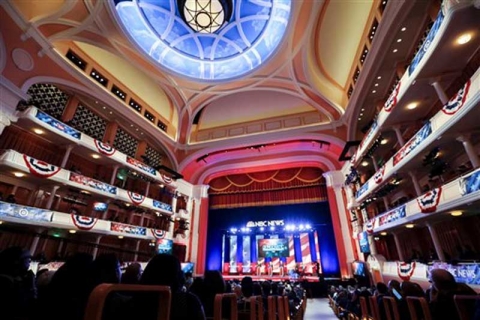 The debates give viewers a chance to see candidates demonstrate their ability to keep cool — or not — under fire. Photo by Stephen B. Morton, AP.

Oh, and we've heard about issues, too.

Is it all too much?

"How many times can they ask you the same question over and over again?" Trump complained during a rally in Madison, Mississippi, this week. "Uh, it is so boring!"

While viewership has cooled since a whopping 24 million people watched the first GOP debate of the 2016 campaign last August, considerable audiences still are tuning in. Nearly 17 million people watched or the Republican debate last week in Detroit and 5.5 million saw the Democrats' faceoff on Sunday night in Flint, Michigan.

Voters have used the debates to help winnow the GOP field from 17 to four and to pare the Democratic roster of candidates from five to two.

Stay tuned: Each side debates again this week — the Democrats on Wednesday, the Republicans on Thursday. After that, there are two more Democratic debates and at least one more Republican debate to come.

While the debates can be repetitive, they've given viewers a chance to see candidates refine their positions over time, think on their feet and demonstrate their ability to keep cool — or not — under fire. They have allowed some candidates to rise from relative obscurity — think Republicans Carly Fiorina and Ben Carson — and others to falter in a very big and public way.

"Certain candidates who looked good on paper — Scott Walker, for instance — could not translate that appeal through the lens of a camera," Northeastern University professor Alan Schroeder, the author of a book on presidential debates, wrote in an email, citing the Wisconsin governor who dropped out. "In the case of Donald Trump, we have learned that debates can be reduced to the level of reality TV, leaving the more traditional contenders ill-equipped to react."

Rubio used strong performances in early debates to help build his candidacy, then wilted when New Jersey Gov. Chris Christie pounced on his rote repetition of canned talking points. Christie, while tough on the attack, didn't seem to resonate with viewers and was out of the race four days after his skewering of Rubio halted the Florida senator's momentum.

Ted Cruz has shown great technical ability in mounting an argument, but the Texas senator's calculated delivery style is a turnoff, says Kathleen Hall Jamieson, director of the Annenberg Public Policy Center at the University of Pennsylvania.

"His voice almost sounds as if he's engaging in a complicitous whisper," says Jamieson.

The body language of the candidates during the debates has told viewers as much as their words.

Written policy papers may sound great, says body language expert Lillian Glass, but watching the candidates on stage prompts voters to think "Do they really believe it? Is that true? How did they handle it under pressure? Can they answer underlying questions that go with it? Have they thought this through? Did somebody write this for them?"

Overall, the combination of a crowded debate stage and Trump's outsized personality has kept the Republican debates from being as policy-oriented as the Democrats'. Trump's command of the spotlight began in the first debate, when he was the only candidate to refuse to raise a hand and pledge to rule out a third-party run for the presidency, and continued to the most recent, when he alluded to the size of his genitalia.

Trump, at his Mississippi rally, indulged in a poor-me moment about the debates, saying, "These guys shout at me — oh, they shout. ... I've been in the center for every single debate. And the line's getting smaller and smaller and smaller."

The Democratic debates have gotten progressively more heated since the first one, when Clinton shook Sanders' hand after the Vermont senator said he was sick of all the questions about the former secretary of state's "damn emails."

There are sure to be more zingers, policy clashes and revealing moments when the candidates debate in Miami this week, but it's not clear how the GOP debates could get more shocking.

Says Aaron Kall, director of debate at the University of Michigan: They've become "the equivalent of political train wrecks — you don't really feel good about watching them, but at the same time you can't turn your head away."