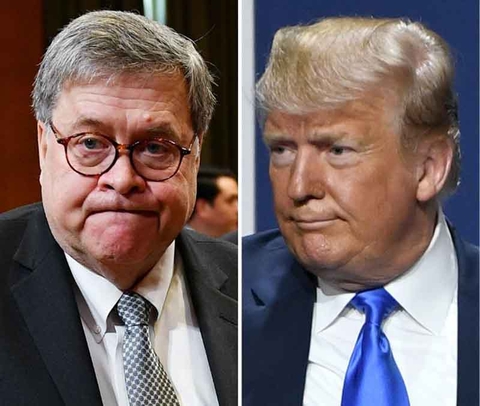 Yet Barr asserted Wednesday morning to the Senate that Trump was concerned with Mueller's potential conflicts of interest when he tried to remove him.

Mueller acknowledges this, but says Trump was immediately told the supposed conflicts of interest were "ridiculous" and didn't affect Mueller's service. (The possible conflicts Trump had flagged questioned Mueller's former job at a private law firm that represented subjects of the investigation, Mueller's membership at a Trump golf course in Northern Virginia and that Mueller had interviewed for the FBI director job under Trump. The Justice Department had examined the potential conflicts and cleared Mueller to be special counsel.)

"This evidence shows that the President was not just seeking an examination of whether conflicts existed but instead was looking to use asserted conflicts as a way to terminate the Special Counsel," Mueller wrote.

Mueller's report also directly refutes Barr's statement Wednesday that Trump may not have believed he was asking McGahn to say something false. In his analysis of the episodes with McGahn, the Mueller report says: "There also is evidence that the President knew that he should not have made those calls to McGahn."

In short, Mueller says the idea that he had conflicts was an excuse Trump wanted to use to fire him.

Mueller identifies this motivation as part of Trump's intent to prevent the investigation from continuing.