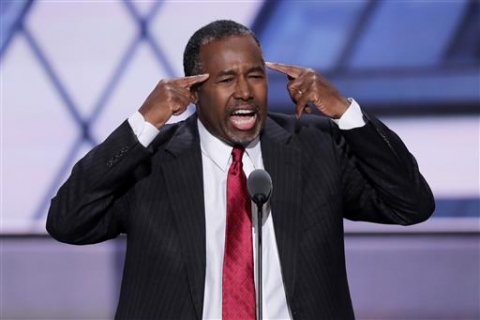 Ben Carson said Tuesday that transgender men and women are “the height of absurdity” while speaking to the Florida delegation breakfast in Cleveland.

The former presidential candidate’s remarks came just before Carson was to speak at the Republican National Convention, according to CNN.

Carson spent most of his time at the convention speaking against the LGBT community.

In an interview Monday with Katie Couric, Carson said, “We look at this whole transgender thing. I got to tell you: For thousands of years, mankind has known what a man is and what a woman is. And now, all of a sudden we don’t know anymore.

“Today you can feel like a woman, even though everything about you genetically says that you’re a man or vice versa,” Carson said.

Carson also stated that gender is “not based on your feelings, it’s based on what you are,” during an interview with The Hill.

“Can a leopard change its spots?  No,” Carson said. “It can’t because it feels like maybe it’s a different creature. No. It’s still a leopard.”

When asked what should be done about transgender issues, Carson responded, “What we ought to do is utilize our brains, utilize our common sense as human beings. We’ve known what men are and what women are for thousands of years. So we don’t know anything, everything is relative — this doesn’t make any sense.”

Carson also compared being transgender to spontaneously deciding to change your ethnicity.

“Wouldn’t that be the same as if you woke up tomorrow morning after seeing a movie about Afghanistan or reading some books and said, ‘You know what? I’m Afghanistan [sic]. I know I don’t look that way. My ancestors came from Sweden, or something, I don’t know. But I really am. And if you say I’m not, you’re a racist.’ This is how absurd we have become!”

Carson has a long and controversial history with the LGBT community, calling transgender civil rights “garbage” and “silly” in January 2013, according to The Advocate.

In an interview with Sean Hannity in March of 2013, Carson also compared supporters of gay marriage to those who practice bestiality.

“My thoughts are that marriage is between a man and a woman,” Carson said. “It doesn't matter what they are, they don't get to change the definition. So it's not something that's against gays. It's against anybody who wants to come along and change the fundamental definitions of pillars of society.”