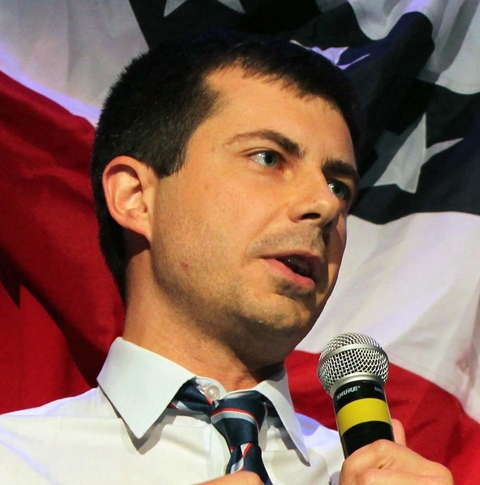 (CNN) -- Democratic presidential candidate Pete Buttigieg weighed in on his opponents' plans to implement "Medicare for All" and free college tuition, calling them "questionable on their merits" and "pretty far out from where Americans are."

"I do think that we should be realistic about what's going to work. And just flipping a switch and saying we're instantly going to have everybody on Medicare just like that -- isn't realistic," the South Bend, Indiana, Mayor said in an interview with CNN's David Axelrod slated to air Saturday night.

"I think that when it comes to a lot of these policies that we're being pushed to do -- say that we can pay down the last penny of tuition for any student including the child of a billionaire. These are things that are questionable on their merits and of course also pretty far out ... from where Americans are."

In the crowded Democratic field, a majority of candidates have said they support some form of a single-payer health care, but disagreement over how to achieve universal health care has come to the forefront both on the campaign trail and on the debate stage. Of the 20 candidates on the two debate stages during the first round of Democratic debates, just four raised their hands when asked who backed the elimination of private health insurance -- Sens. Bernie Sanders of Vermont, Elizabeth Warren of Massachusetts and Kamala Harris of California, along with New York City Mayor Bill de Blasio.

Sanders, however, has become the lodestar of the Medicare for All debate. Though generations of Democrats have toyed with ideas for expanding or guaranteeing medical coverage, Sanders' relentless push for Medicare for All -- a proposal unveiled with several big-name co-sponsors -- has set a measuring stick among Democrats in this primary.

Buttigieg himself is not opposed to Medicare for All, but has said it should be an option.

"The best way to do that is a Medicare for all who want it. We take some flavor of Medicare, you make it available on the exchange as a public option. And you invite people to buy into it," he said at a CNN town hall in March.

Buttigieg, in an interview that will air on The Axe Files Saturday at 7 p.m., ET, also addressed some dipping poll numbers following his initial surge in March and April of this year.

"Our plan was to have a slow burn, to try to assert that we belonged in the race, period -- over the spring and into the summer and then hope to break out in the debates. What we found instead is that the message caught fire early," the Democratic presidential hopeful said. "It's a great problem to have."

"You definitely don't want to have your best moments too early in the race. But what we've seen is, you know, we arrived in a kind of very swift fashion and now we've carved out a place in the leading group. But in order to stay there, we've got to earn that," Buttigieg added.

In CNN's July 2 poll, Buttigieg, who announced on the same day that he had raised nearly $25 million in the second quarter, came in with only 4 percent support in the race for the Democratic nomination. That's down from 5 percent from in late May and 7 percent in late April.