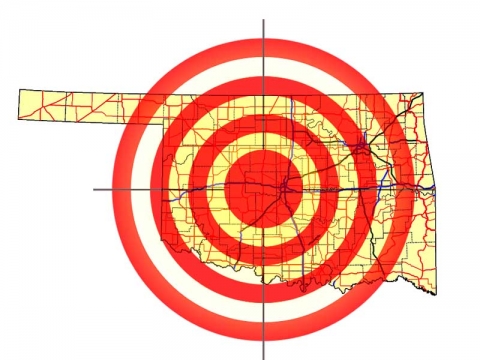 As one of a dozen states holding presidential primary elections on "Super Tuesday," Oklahoma appears to be a coveted prize. File photo.

OKLAHOMA CITY (AP) — As one of a dozen states holding presidential primary elections on "Super Tuesday," Oklahoma has a relatively small percentage of the overall delegates up for grabs in each party's nomination battle, but the conservative state with a reputation as the reddest of the red still appears to be a coveted prize.

Both Republican and Democratic candidates are targeting Oklahoma ahead of Tuesday's election, with GOP candidates Ted Cruz, Marco Rubio and Donald Trump all visiting the Sooner State in the last week. Rubio and Trump both drew thousands to rallies Friday in Oklahoma City, with Trump getting introduced to the crowd by his newly minted surrogate, New Jersey Gov. Chris Christie. Cruz returned to Oklahoma on Sunday, with campaign stops in Lawton, Oklahoma City and Tulsa, and Rubio planned a return visit to Oklahoma City later on Monday.

"It's historic," said Oklahoma Republican Party Pam Pollard. "We were pretty proud of 2012 when all the presidential candidates made a visit to Oklahoma, but this year, they're holding multiple rallies."

On the Democratic side, both former Secretary of State Hillary Clinton and Vermont Sen. Bernie Sanders made television ad buys in Oklahoma and have visited. Former President Bill Clinton stumped for his wife in Oklahoma twice in the last two weeks, including events Saturday in Tulsa and Edmond, while Sanders made a second visit to the state Sunday with a rally in Oklahoma City that drew about 6,000.

The presidential primaries on Tuesday are the only statewide elections on the ballot, but there may be local questions depending on where the voter lives. The statewide primary election when voters select party nominees for U.S. Senate, House and state and local races is June 28.

Polls will be open from 7 a.m. to 7 p.m. across Oklahoma on Tuesday.

For the first time in Oklahoma history, registered independents will be able to cast their ballots in a presidential primary election, but only for Democratic candidates. Oklahoma primaries have traditionally been closed affairs, with only registered Republicans and Democrats allowed to cast ballots for their party's nominee, and registered independents had to wait until the general election to vote.

But in an attempt to reach out to independents, the state's fastest growing segment of voters, Democrats voted last summer to open their primary to registered independents.

"Simply put, it feels democratic," said Brian Stalcup, a 38-year-old registered independent from Norman who plans to cast a primary ballot Tuesday for the first time. "I not only have a choice in who I vote for, but I am allowed to participate in the process."

The Oklahoma Republican Party did not make that change, so its primary election allows only voters who registered as Republicans by the Feb. 5 deadline.

Unlike her gubernatorial counterparts in several other Super Tuesday states, Oklahoma Gov. Mary Fallin has not endorsed a GOP presidential candidate. But Fallin greet each of the Republicans who visited Oklahoma over the weekend, introducing Rubio and Cruz at their events and sitting on the front row of a Trump rally in Oklahoma City on Friday night.

"She's trying to be equally accommodating to all of the candidates," said Fallin spokesman Michael McNutt. "At this time, she doesn't plan an endorsement before Tuesday."

Rubio enjoyed the endorsement of South Carolina Gov. Nikki Haley before South Carolina Republicans went to the polls on Feb. 20, while Cruz is hoping his endorsement by Texas Gov. Greg Abbott will boost his chances for a much-needed win in his home state on Tuesday.

Oklahoma Republicans have 43 pledged delegates up for grabs on Tuesday, which is about 7 percent of the 595 Republican delegates at stake in 11 GOP contests across the country. Oklahoma's Republican delegates are allocated proportionally based on election results, including some that are awarded based on results within each congressional district. Each candidate must receive at least 15 percent of the vote to receive delegates, and if any candidate receives more than 50 percent of the vote, it becomes a winner-take-all scenario. The GOP does have superdelegates, but under a party rule change they are bound this year to vote for their state's election or caucus winner, with an exception in a few states that don't hold presidential preference votes.

Oklahoma Democrats have 38 pledged delegates and four superdelegates who aren't bound to any one candidate. The pledged delegates in Oklahoma, which are only about 4 percent of the Democratic delegates up for grabs on Super Tuesday in 11 states and American Samoa, are allocated by district and statewide vote.