A challenging time for LGBT activists in US and abroad 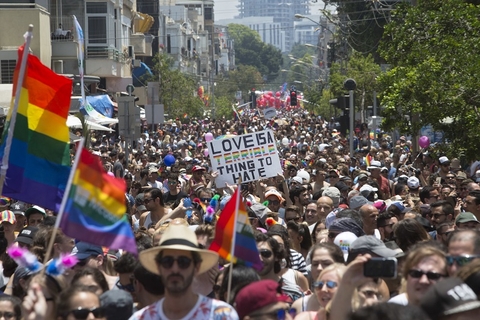 The events come amid new political challenges for the LGBT-rights movement in the United States and numerous reports of anti-LGBT violence and persecution abroad. AP photo.

In a two-day span, supporters of LGBT rights are joining in protest marches Sunday in dozens of cities in the U.S. and abroad, and then observing Monday's one-year anniversary of the mass shooting that killed 49 people at Pulse, a gay night club in Orlando, Florida.

The events come amid new political challenges for the LGBT-rights movement in the United States and numerous reports of anti-LGBT violence and persecution abroad. Some examples:

—According to multiple reports, scores of gay men have been detained and tortured in the Russian republic of Chechnya.

—In Indonesia, animosity toward the LGBT community has been whipped up by anti-gay comments from cabinet ministers and other public figures. In the capital, Jakarta, police detained 141 men in a May 21 raid on a gay gym and sauna. On May 23, on orders from an Islamic Shariah court, two men received more than 80 lashes of the cane for having sex together; hundreds of onlookers jeered at them.

—In Bangladesh, authorities made 27 arrests in a May 19 raid on a group of gay men at a community center near the capital, Dhaka. Last year, a leading LGBT activist, Xulhaz Mannan, was hacked to death in Dhaka by suspected militants.

—In Nigeria, police arrested more than 50 young men celebrating a gay wedding in April. Nigerian law bans gay marriage; violators can be punished by up to 14 years in prison.

—In Moldova, President Igor Dodon spoke out against an LGBT parade organized in the capital city, and said he did not consider himself to be president of the Eastern European country's gays.

—Nearly all of the Republicans who hold power in Congress have declined to back a Democratic-backed bill that would provide nationwide non-discrimination protections for LGBT people.