This church turns heads with its political street signs 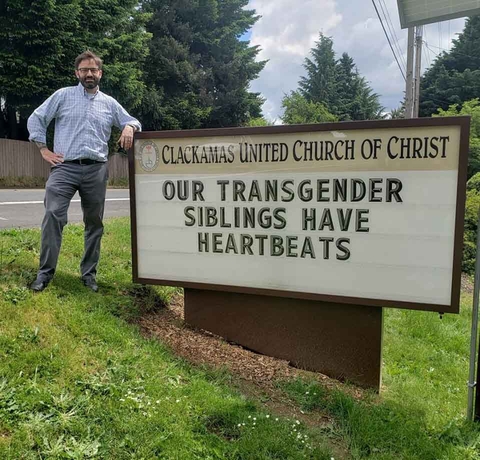 Like thousands of pastors, Rev. Adam Ericksen strides out on the church lawn each week to post a message on a marquee sign next to the street.

But his are a little more eye-catching than most.

This morning he decried white supremacy, advocating for Harriet Tubman's place on the $20 bill.

Last week, as "heartbeat" abortion bills were becoming law in more and more states, he reminded churchgoers and those driving by that transgender people have heartbeats too.

Ericksen said he took the reins about a year and a half ago at Clackamas United Church of Christ in Milwaukie, Oregon, just outside of Portland. At the time, the church had about 30 reliable attendees each Sunday, he told CNN.

Like any pastor, he was looking for ways to spread his message in the community, and to build his flock. "The best way to do that is with this sign," he said.

Since then, they've just about doubled, with 50 to 60 people filling the pews each week.

"People are thirsty to know they are loved"

He posts Biblically-inspired messages based on his sermon, or what's happening in the news. The reaction has been positive. 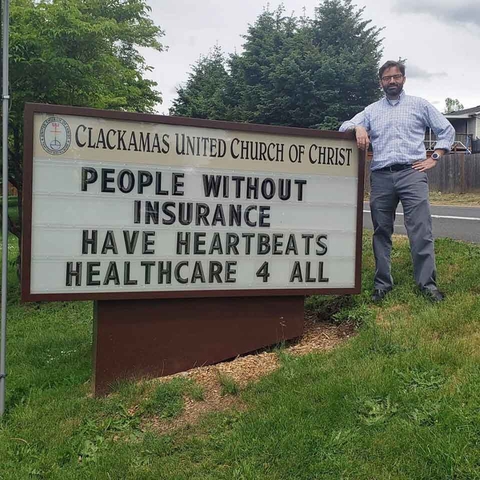 Drivers honk in support as they go by. And the signs have a been a huge hit on social media, some getting more than 10,000 shares on Facebook.

"We've gotten hundreds of messages, including from transgender people who say they wish they had a church like this in their area," he said.

"People are thirsty to know they are loved," Ericksen said. "In every area there are pockets thirsting for this message of radical inclusion."

He says "there's been almost no criticism from the local community." Occasionally people do say the signs are a bit political, though.

And that's the point.

"Jesus preached the kingdom of God, and this was politically loaded message," Ericksen said. "His harshest message was for religious leaders who marginalized people." 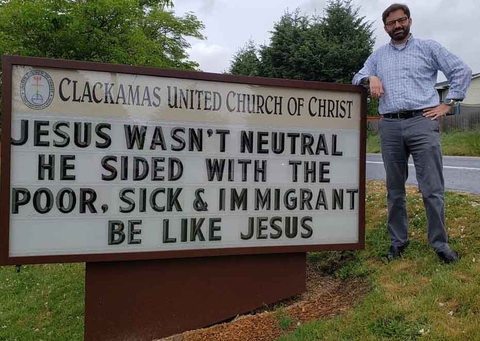 He cites Christ's sermon on the plain in the Gospel of Luke, as one example of Christ calling out political and religious powers who don't care for the downtrodden: "But woe to you who are rich, for you have already received your comfort."

His mother's life led him to his interpretation of Scripture

The United Church of Christ allows its local churches autonomy on most theological matters, Ericksen says, so he has little fear of getting out in front of clerical leadership on hot-button issues.

He's more interested in staying true to the legacy of the woman who raised him.

It was his own mother who inspired his inclusive interpretation of the Bible. The Gospel message seemed to have saved her as she was fighting a losing battle with cancer while he was a teenager.

Growing up as a laissez-faire Christian, he said his family went to church at his father's insistence, but he and his mom, who often "cursed like a sailor," usually left before the service was over to head to Taco Bell.

After she was diagnosed with cancer, Ericksen asked his mother, "Are you afraid?"

"That's the kind of radical grace that all people get," Ericksen said. "Jesus loved my mom."

And that's the same message he's now sending to Muslims, immigrants, African-Americans, the LGBTQ community, the sick and the poor each week through a sign now seen around the world.