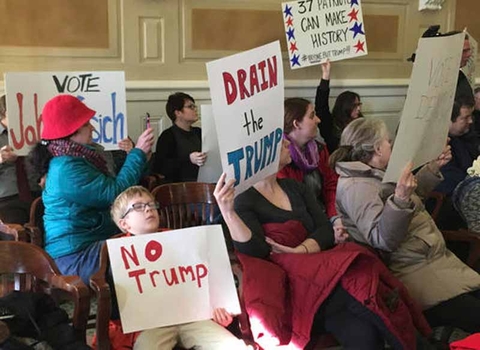 Little Rock, Ark. (AP) — It was touch-and-go for a minute or two, but as Arkansas' old Supreme Court chamber cleared following a meeting of the state's Electoral College, there were surer signs that a divided nation can coexist in a Donald Trump presidency.

The wooden banister that separates barristers from spectators never seemed as tall as it did Monday — a literal and figurative barrier between three dozen or so people who were upset with last month's election results and the three dozen or so people there to witness Arkansas delegates certify the Republican's victory. Except for the 11 seconds it took to pledge allegiance to the flag, the 30-minute meeting couldn't have been more divided.

"He's a fascist," a protester shouted shortly after Jonathan Barnett, the head of the state's delegation, declared Trump had won all six votes.

"He's our president," someone shouted back.

Despite threats from Secretary of State Mark Martin to clear the room, a woman holding a sign shouted, "You voted for a homophobe," after the panel chose Vice President-elect Mike Pence, who as Indiana governor backed policies that some said would lead to discrimination against the LGBT community. Capitol police removed her from the room.

When the Electoral College finished its work, tourists resumed their self-guided walk-throughs and Dane Fulmer and Juniper Helms met at the railing.

"Since I can't tell the future, I don't know if he's going to be the greatest thing since sliced bread," Fulmer said, wearing a red "Trump, Make America Great Again, 11-8-16" hat and a "Don't Tase Me, Bro" sweatshirt. "Time will tell whether he's a real doofus."

Helms, a transgender woman, had carried a sign reading "Trump is a Threat to America" and waited patiently to talk to Fulmer, who'd held the Bible his wife Jonelle swore on as she joined the panel that committed to the president-elect.

"I know a lot of people who identify as Republicans," Helms said after speaking with Fulmer. "There's a stereotype that all Republicans are homophobes or against LGBT. Every single one of them that I've known, they don't hate me.

"Dane didn't strike me that way. He seemed like a reasonable guy," Helms said.

Fulmer lives by a take-him-or-leave-him ethos. Four times in a 10-minute interview in the chamber (and once more over the phone), he said he'd gladly talk with political opponents but punch anyone in the chest who tried to take his freedom away.

"I don't mind debating with traditional Democrats over whether we have vanilla ice cream or chocolate ice cream, but there's going to be no debate over whether I want freedom or a socialist state," Fulmer said in the chamber.

All Helms wants is freedom, too.

"I've been using the bathroom of my choice and nobody notices," Helms said amid a discussion of state and national policies attempting to determine where people can use a toilet. "I've been to several restaurants where they have a men's bathroom and a women's bathroom and you go in and there is one toilet and one sink.

With freedom-loving people on both sides of the courtroom and civil conversations about the future, there's hope for the old Republic yet.

"I do see why people would gravitate to him," Helms said.

"If he's a doofus, we are going to throw the guy out," Fulmer said.