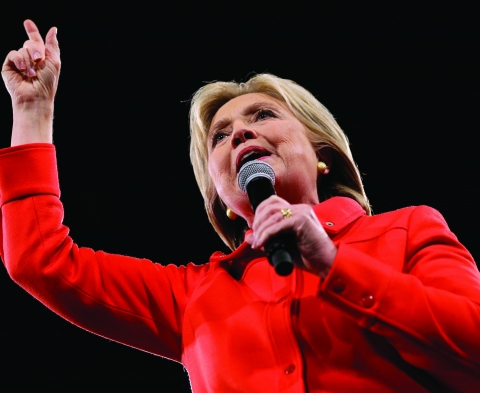 The Defense of Marriage Act (DOMA) originally defined a "spouse" only in relationship by a heterosexual couple. The act was originally signed into law in 1996 by then President Bill Clinton.

CLINTON:  On Defense of Marriage, I think what my husband believed – and there was certainly evidence to support it – is that there was enough political momentum to amend the Constitution of the United States of America, and that there had to be some way to stop that.

And there wasn’t any rational argument – because I was in on some of those discussions, on both “don’t ask, don’t tell” and on – on DOMA, where both the president, his advisers and occasionally I would – you know, chime in and talk about, “you can’t be serious.  You can’t be serious.”

But they were.  And so, in – in a lot of ways, DOMA was a line that was drawn that was to prevent going further.

MADDOW:  It was a defensive action?

CLINTON:  It was a defensive action.  The culture rapidly changed so that now what was totally anathema to political forces – they have ceded.  They no longer are fighting, except on a local level and a rear-guard action.  And with the U.S. Supreme Court decision, it’s settled.

“Don’t ask, don’t tell” is something that – you know, Bill promised during the ‘92 campaign to let gays serve openly in the military.  And it’s what he intended to do.

CLINTON:  And then – yeah.  Oh my gosh (ph), it was the most astonishing overreaction, but – by the military, by the Congress.  I – I remember being – you know, on the edge of one of those conversations, and – and so “don’t ask, don’t tell,” again, became a defensive line.

So I’m not in any way excusing them.  I’m explaining them.

And that is her “explanation” for so many LGBT citizens to be unrecognized in the military for all these years.  As “a defensive line” to "prevent going further.”

For too many LGBT military, the law was a further way to keep them closeted; silenced while still fighting for this country yet gleaning none of the same benefits other service personnel received?

To add insult to injury, could you imagine being invisible in the eyes of the US government – the same country your partner gave his or her life for? Can you imagine standing at your partner's funeral as the flag bearer walks past you to present the American flag to a relative of your partner?

In reality, DOMA, in conjunction with other statutes, had barred same-sex married couples from being recognized as "spouses" for purposes of federal laws, effectively barring them from receiving federal marriage benefits. DOMA's passage did not prevent individual states from recognizing same-sex marriage, but it imposed constraints on the benefits received by all legally married same-sex couples.

However a political candidate wants to describe it now, DOMA was not considered as a good thing for the LGBT Americans who served or gave their lives for this country during the time it was the law.