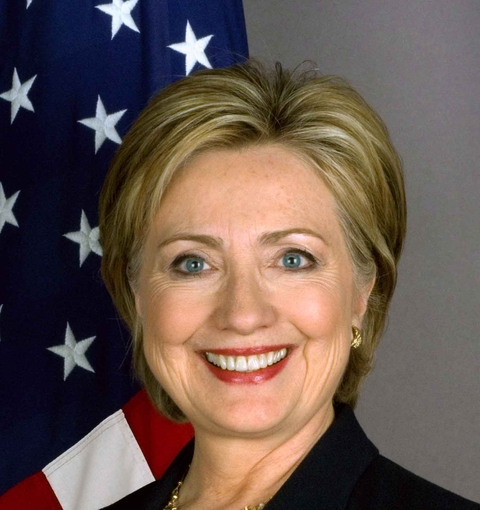 Hillary Clinton on Wednesday suggested a hypothetical scenario in which a Democratic presidential candidate publicly asks China to obtain and release President Donald Trump's tax returns, saying this would not constitute illegal coordination based on Trump's actions in 2016 and special counsel Robert Mueller's legal conclusions.

"Imagine, Rachel, that you had one of the Democratic nominees for 2020 on your show, and that person said, 'You know, the only other adversary of ours who's anywhere near as good as the Russians is China. So why should Russia have all the fun? And since Russia is clearly backing Republicans, why don't we ask China to back us,'" Clinton said during an interview with MSNBC's Rachel Maddow, before invoking comments Trump made in 2016.

"And not only that, 'China, if you're listening, why don't you get Trump's tax returns. I'm sure our media would richly reward you,'" Clinton said. "Now, according to the Mueller report, that is not conspiracy because it's done right out in the open. So if after this hypothetical Democratic candidate says this on your show, within hours, all of a sudden, the IRS offices are bombarded with incredibly sophisticated cybertools looking for Trump's tax returns, and then extracts and them and then passes them to whatever the new WikiLeaks happens to be and they start being unraveled and disclosed, nothing wrong with that."

She added: "So, hey, let's have a great power contest, and let's get the Chinese in on the side of somebody else. Just saying that shows how absurd the situation we find ourselves in."

Clinton's scenario was a direct reference to Trump's actions during the 2016 campaign, when Trump, during a July 2016 press conference, publicly encouraged Russiato hack Clinton's emails in an effort to find thousands of emails deleted from Clinton's private server. According to a redacted version of Mueller's report, Trump privately and repeatedly "asked individuals affiliated with his campaign to find the deleted Clinton emails."

Following Trump's comments, Russian hackers working "after hours" tried "for the first time" to hack email accounts used by Clinton's "personal office" and the campaign addresses of dozens of Clinton staffers, according to the July 2018 indictment of 12 hackers from Russia's military intelligence agency known as the GRU.

Mueller's report concludes that it "did not establish that members of the Trump campaign conspired or coordinated with the Russian government in the election interference activities."