Stark differences between Obama and Romney in November election 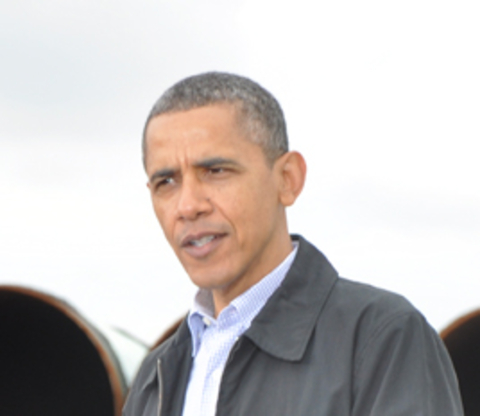 Here are some of the starkest choices between President Barack Obama and Republican challenger Mitt Romney.

Obama would extend expiring Bush-era tax cuts for households earning under $250,000 a year but allow them to rise for wealthier taxpayers. He'd make those earning more than $1 million a year pay taxes at a minimum 30 percent rate. He would let the top two tax rates go back up 3 or 4 percentage points to 39.6 percent and 36 percent and raise taxes rates on capital gains and dividends for the wealthy.

Romney would keep Bush-era tax cuts for all incomes and cut taxes on individuals and companies, bringing the top individual rate of 35 percent down to 25 percent and would curtail some tax deductions and exemptions for the wealthiest, but hasn't specified which ones.

Obama pledges to reduce federal spending — but gradually to prevent further shocks to the still-wobbly economy. He acknowledges that government debt has risen sharply on his watch but says that the tens of billions in stimulus spending, bank and auto bailouts were necessary to keep the recession from being worse. He reached agreement with congressional Republicans to cut $487 billion in military spending over a decade.

Romney says Obama has made the economic downturn worse, not better. With the government poised to post its fourth consecutive annual deficit of more than $4 trillion and the national debt standing at just under $16 trillion, Romney says the best way to spur recovery and stronger job growth is for the government to get out of the way of private enterprise. He would ease regulations, especially those on small businesses, while blocking the bipartisan agreement to sharply cut military spending.

Obama supports abortion rights and gay marriages and a health-law requirement that contraceptives be available for free for women enrolled in workplace health plans.

Romney opposes abortion rights after once supporting them. He says state law should guide abortion rights and would like to see the Supreme Court reverse the Roe v. Wade ruling supporting abortion rights. He opposes legal recognition of same-sex marriage and says it should be banned with a constitutional amendment and not left to states.

Obama is taking steps to implement his signature health-care overhaul now that the Supreme Court has approved it. Romney, deriding the program as "Obamacare," says he'd seek its repeal on Day One of a Romney presidency.

Obama issued a directive in June that immigrants brought illegally to the United States as children be exempted from deportation and granted work permits if they apply. Romney favors a U.S.-Mexico fence, opposes education benefits to illegal immigrants and suggests those here illegally should deport themselves by leaving the country voluntarily. He criticized Obama's decision on illegal immigrants who came as children but hasn't said whether he would rescind the policy if elected.

Obama ordered a temporary moratorium on deep-water drilling after the huge BP oil spill in the Gulf of Mexico but has pushed for more oil and gas drilling overall. However, he has blocked the Keystone XL oil pipeline from Canada and opposes subsidies to the oil industry. He is a big promoter of renewable energy and has achieved historic increases in fuel economy standards for automobiles. But he failed to persuade Congress to pass limits he promised on carbon emissions.

Romney favors more offshore drilling and would end a century of federal control over oil and gas drilling and coal mining on government lands by turning over the authority to states except for areas termed "off limits." He would put more emphasis on oil, gas and coal production and less on green energy.

Obama opposes a near-term military strike on Iran, either by the U.S. or Israel, although he says the U.S. will never tolerate a nuclear-armed Iran. He chastised Israel for continuing to build housing settlements in disputed areas and has pressed both sides to begin a new round of peace talks. He opposes citing China as a currency manipulator, instead pressing the matter through diplomacy.

Romney says Obama isn't tough enough on China, has been too accommodating with Iran and has turned his back on Israel. He'd review steps Obama took on Israel "and do the opposite." He has branded Russia the "No. 1 geopolitical foe" of the U.S. and threatened to label China a currency manipulator.