Cruz calls for Muslim surveillance in US, sparking criticism 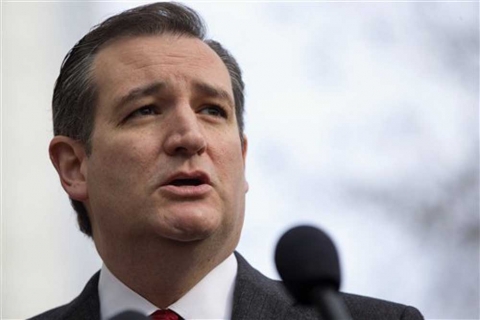 Sen. Ted Cruz said surveillance in Muslim neighborhoods in the U.S. must be intensified following the bombings in Brussels. Photo by Jacquelyn Martin, AP.

WASHINGTON (AP) — Republican presidential candidate Ted Cruz said Tuesday that surveillance in Muslim neighborhoods in the U.S. must be intensified following the deadly bombings on Brussels' airport and subway.

Echoing his rival Donald Trump, Cruz said the U.S. should stop the flow of refugees from countries where the Islamic State militant group has a significant presence. The Islamic State took credit for the Brussels attacks that killed dozens Tuesday and wounded many more.

"We need to empower law enforcement to patrol and secure Muslim neighborhoods before they become radicalized," the Texas senator said in a statement.

The Council on American-Islamic Relations, the nation's largest Muslim civil rights and advocacy organization, condemned Cruz's call for surveillance, saying it sends "an alarming message to American-Muslims who increasingly fear for their future in this nation and to all Americans who value the Constitution and religious liberties."

Trump, who spoke to Fox News as developments in Brussels were unfolding, said he had warned about such attacks. "Brussels was a beautiful city, a beautiful place with zero crime, and now it's a disaster city. A total disaster," he said.

In December, following attacks in Paris and San Bernardino, California, Trump called for a temporary and conditional ban on Muslims coming to the United States. He described Brussels as a "hellhole" because of its radical elements and their connection to the Paris attacks.

Both Cruz and Democratic front-runner Hillary Clinton criticized Trump for saying Monday that NATO "is costing us a fortune" and the U.S. should diminish its role in the coming years. Cruz said the suggestion of withdrawing from NATO is a "pre-emptive surrender."

Speaking to CNN, Clinton called NATO "the best international defense alliance, I think, ever." She reasserted her view that the U.S. should embrace, rather than alienate, Muslim communities, saying "we want them to report it; we want them to be part of protecting the United States."

Democratic hopeful Bernie Sanders, campaigning in Arizona on Tuesday, said boosting national security and protecting civil rights must go hand-in-hand. He said he strongly disagrees with calls by some Republicans for heightened domestic surveillance of Muslims.

"That would be unconstitutional — it would be wrong," Sanders said.

Asked about Cruz's comment, none of a half-dozen conservative House Republicans meeting with reporters Tuesday criticized him and most spoke of the need to keep the country safe.

"Nearly every neighborhood is patrolled. That's what local law enforcement does," said Rep. Tim Huelskamp, R-Kan., who has endorsed Cruz. He said he didn't know specifically what Cruz was referring to.

"We need to do everything that makes good common sense, that's in the best interests of national security, but obviously it needs to be done in a way that's consistent with the Constitution," said Rep. Jim Jordan, R-Ohio.

"It's an interesting question. It's the jazzy kind you guys like on a presidential front-runner. That's a cool question," said Rep. Dave Brat, R-Va. He criticized reporters for not asking Democrats if they have plans to keep the country safe.

"I believe in the First Amendment, the Second Amendment, every one of them, but we also know that in this country, we're going to have to step up security in every neighborhood across America," said Rep. Matt Salmon, an Arizona Republican who has endorsed Cruz.