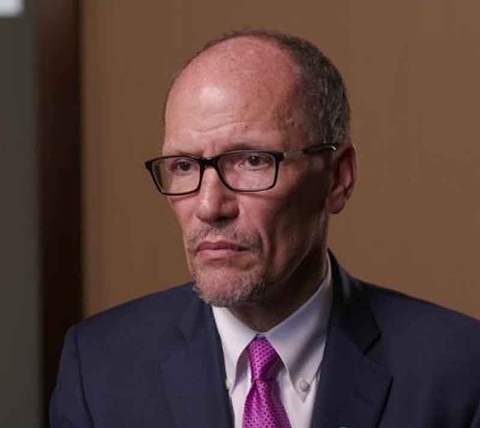 Democratic National Committee members adopted language to their charter and rules Saturday to include gender self-identification and gender nonbinary members.

The new wording amends the party's charter requirement that all committees and like bodies be divided equally between men and women to account for members who don't identify with either gender.

Gender nonbinary members will not be counted as either male or female, "and the remainder of the delegation shall be equally divided."

"At the root of our diverse party is a commitment to inclusion and opportunity," DNC Chair Tom Perez said in a statement to CNN. "By adopting this amendment, the Democratic National Committee is ensuring every Democrat feels welcome and embraced for who they are. This action reaffirms our solidarity with the LGBTQ community and challenges governments, employers, and organizations across the country to do the same."

Democrats previously had to choose a gender to participate in caucuses or party organizations to meet the requirement of equal representation between men and women.

As some states now include a third gender option for nonbinary individuals on identifications, drivers' licenses and other official documents, Democrats wanted to include the option as well as part of the changes made to their charter during the summer meeting.

"I think it's not only significant for the DNC, but I think it's significant for the LGBT community," DNC Secretary Jason Rae, who helped author the changes, told CNN. "The language that was adopted expands our definition of gender -- it includes making sure that we can have gender nonbinary individuals participating fully in our process."

Rae, a member of the rules committee that wrote the new language, helped ensure the party met its goals of allowing the LGBTQ community to participate more fully.

"One of the goals of all the reforms was to really make sure we're building an inclusive party where all people were able to participate in the nominating process," he said. "The addition around language around gender nonbinary individuals really allows us to fill that mission."

State Democratic parties will begin implementing the changes to their own committees and organizations in the lead-up to the 2020 convention.

"I know we have work to do to continue implementing this proposal," Rae said. "I'm excited for the step forward we're making to show that we are a party that welcomes all of the LGBTQ+ community."