Democrats and media blamed for change in venue for G7 summit 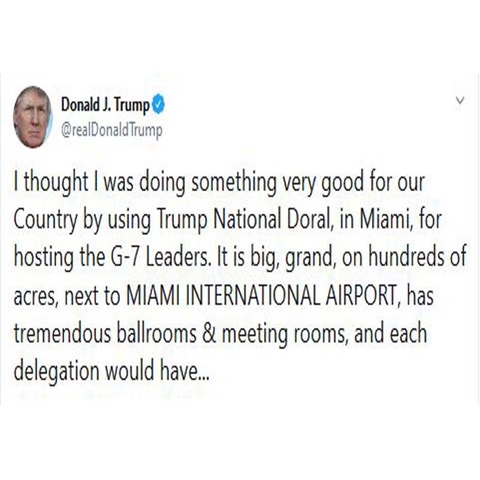 Saturday night, President Donald Trump abruptly reversed course and announced next year's G7 economic summit of world powers would not be held at Trump National in Doral, Florida, in a rare departure after facing bipartisan backlash.

The President tweeted the major change just over 48 hours after the initial announcement: "We will no longer consider Trump National Doral, Miami, as the Host Site for the G-7 in 2020. We will begin the search for another site, including the possibility of Camp David, immediately." 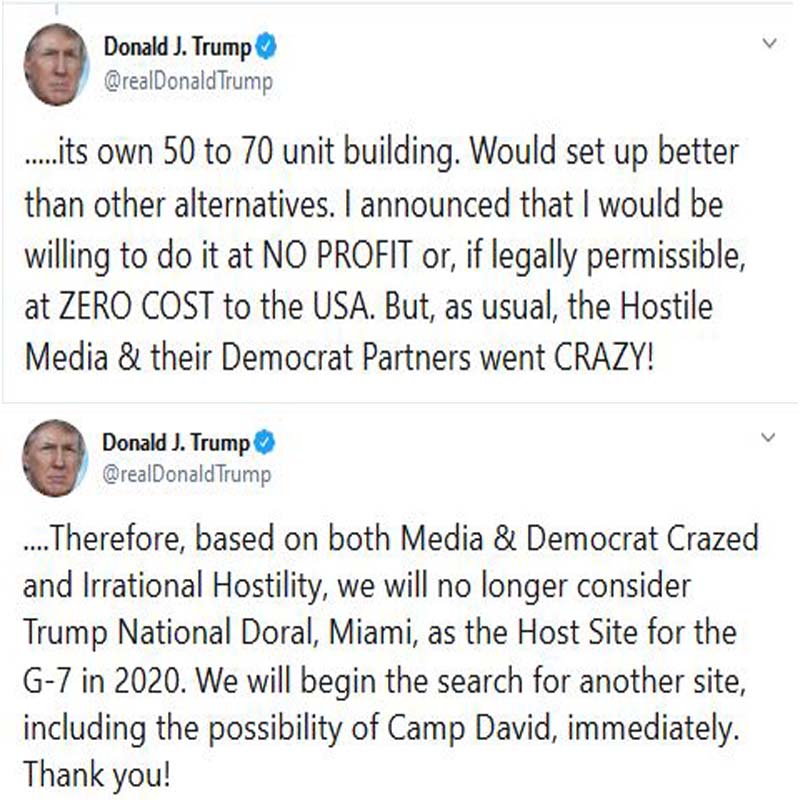 The President called the rising criticism his administration was facing "Irrational Hostility," and wrote, "I thought I was doing something very good for our Country by using Trump National Doral, in Miami, for hosting the G-7 Leaders."

The White House had been defending its decision to use Trump's own property as the site for the G7 in the face of mounting outrage and disapproval. White House press secretary Stephanie Grisham told CNN that the Doral site would be "significantly cheaper" than other options.

The administration had argued the event would be run "at cost," or without profit, by the Trump National property because of the emoluments clause of the Constitution, which largely prohibits the President from accepting gifts and money from foreign governments.

But it is not clear that simply avoiding a profit would keep the administration from running afoul of the emoluments clause. The administration also had not clarified the details of how it would determine what "at cost" would be.

House Speaker Nancy Pelosi told CNN on Friday that holding the G7 at Trump's property was "completely out of the question."

The move to host the summit at Trump's property had added to deep fractures in the President's relationships with some allies in Congress already upset with his decision to pull troops out of Syria.

However, several of Trump's staunchest defenders on Capitol Hill said they were not concerned about it. GOP Rep. Jim Jordan told CNN that "the American people are much more concerned about not where it happens, but what happens at the event."

But some members of the President's party suggested otherwise.

Republican Rep. Adam Kinzinger of Illinois said he was "not happy about it."

"I read the emoluments clause again yesterday," Kinzinger said on Friday, "and it talks about titles and nobility and all this. I don't know if it's a direct violation, but I don't understand why at this moment they had to do it."

Noah Bookbinder, the executive director of Citizens for Responsibility and Ethics in Washington, weighed in on the President's reversal, calling it "a bow to reality."

"President Trump's decision to award the G-7 Conference to his own property was outrageous, corrupt and a constitutional violation. It was stunningly corrupt even for a stunningly corrupt administration," Bookbinder said in a statement. "His reversal of that decision is a bow to reality, but does not change how astonishing it was that a president ever thought this was appropriate, or that it was something he could get away with."

At a Thursday press briefing, acting White House chief of staff Mick Mulvaney defiantly addressed the concern that hosting the G7 there already creates profit by highlighting the resort, asking reporters to "consider the possibility that Donald Trump's brand is already strong enough on its own."

Mulvaney told reporters it was Trump who brought up the idea of hosting the G7 at Doral, explaining: "We sat around one night. We were back in the dining room and I was going over it with a couple of our advance team. We had the list, and he goes, 'What about Doral?' And it was like, 'That's not the craziest idea. It makes perfect sense.'"

The G7 reversal is yet another backtrack from Mulvaney's White House press conference. Mulvaney, in a stunning admission, confirmed Trump froze nearly $400 million in US security aid to Ukraine in part to pressure that country into investigating Democrats. Hours later, he denied ever saying those words.