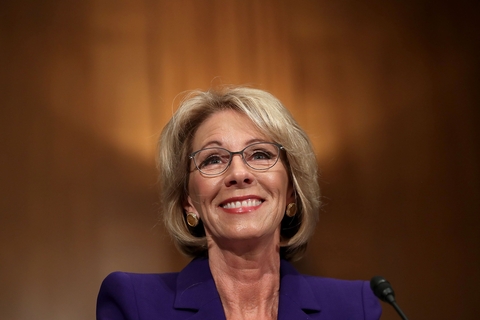 (CNN) -- Education Secretary Betsy DeVos on Tuesday addressed the deadly shooting at Santa Fe High School in Texas, telling House lawmakers the shooting "was only the most recent, devastating reminder that our nation must come together to address the underlying issues that create a culture of violence."

"Our commitment to every student's success is one we must renew every day, but first we must ensure our children are safe at school," she said.

DeVos also said the school safety commission she oversees, which was created in the wake of the Parkland, Florida, shooting earlier this year, "looks forward to delivering best practices and findings by year's end" and gave lawmakers some details of the group's most recent meeting last week. She described that meeting as "one of the first broader listening sessions" and said members heard from parents of students that had been killed in school shootings.

She stressed that the "primary responsibility for the physical security of schools rests with states and local communities, and made no mention of gun measures or reforms.

DeVos's Capitol Hill testimony Tuesday marked her fifth time testifying before congressional lawmakers and comes on the heels of a trip to New York in which she was criticized for not visiting any public schools. Instead, DeVos toured two Orthodox Jewish schools and spoke in support of public funding for religious schools.

While DeVos was questioned by several lawmakers about school safety in the wake of another deadly shooting, the issue was not the overwhelming focus of the broad hearing. DeVos took questions on a wide variety of topics including her response to teacher walkouts across the nation, the agency's Office for Civil Rights and her commitment to the rights of LGBTQ students.

She was pressed by Virginia Rep. Bobby Scott -- the committee's top Democrat -- over whether she had approved state education plans that violate the law. Scott repeatedly pressed DeVos on plans where school grades don't include subgroup performance, suggesting that allowed states to ignore disadvantaged groups.

"All of the plans that I have approved follow what the law requires and it will, we will continue to do so," DeVos said.

"How do you address an achievement gap if subgroup performance isn't addressed," Scott asked DeVos.

At one point during the hearing Florida Democratic Rep. Frederica Wilson asked DeVos if she was aware she was "resegregating" the nation's schools by expanding school choice programs, and in turn, transferring federal funds away from public schools.

DeVos did not respond to the specific allegation, but said that she believed that giving parents choices allows them to have the opportunity to get their child into a school or educational environment that works better for them than the school they may be assigned to.

In another exchange, DeVos was asked by Colorado Democratic Rep. Jared Polis about her plans "to address LGBTQ discrimination and harassment in our schools," citing two different lawsuits. DeVos said she was "committed to protecting civil rights, as stated by civil rights law" but that courts had been "mixed" on transgender students.

Polis pressed DeVos, arguing that the rights of transgender students are protected by court precedent and the law.

"I am not going to make up law at the Department of Education," she said.

DeVos also told lawmakers she believes individual schools should decide whether to call Immigration and Customs Enforcement if they believe students are undocumented, calling that "a school decision" and a "local community decision."

She added that "we have laws and we also are compassionate."

DeVos also faced questions over her department's handling of investigations into for-profit schools.

The New York Times reported earlier this month that DeVos wound down an investigative team at the Department of Education that had been established during the Obama administration, effectively ending inquiries into for-profit colleges where some of the agency's top staffers previously worked. The Education Department's spokesperson did not respond to CNN's request for comment for that story.

DeVos was pressed by California Rep. Susan Davis at Tuesday's hearing about how many people at the agency are looking at allegations of fraud in for-profit schools, DeVos said she did not know how many staffers were currently on that team.

She said though that the team "has been committed to this, is dedicated to this" and has been "augmented in order to ensure that they backlog that we inherited is able to be addressed as promptly as possible."

New Jersey's attorney general Gurbir Grewal wrote to DeVos, the Times reported, and alleged the agency had ignored requests from the state to work on behalf of students who were defrauded by the now-bankrupt Corinthian Colleges chain.