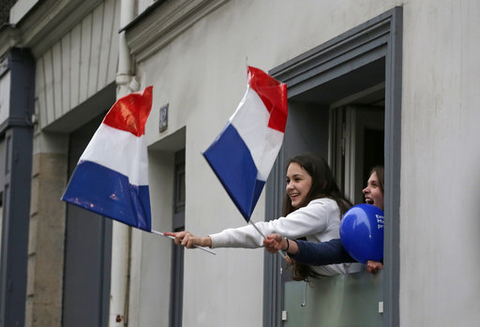 PARIS (AP) — It's a triple-whammy. The last six months have seen three European elections and three defeats for far-right populists. The tempting conclusion is that populism's destructive ability to dismantle old worlds without having credible blueprints for building new ones has been contained for now — at least in western Europe.

In Austria, in the Netherlands and now in France, not only were there no cigars for Norbert Hofer, Geert Wilders and Marine Le Pen, but they got, at best, no closer than sniffing distance to power. Hofer came nearest, with 46 percent of the vote for Austria's presidency in December. Le Pen lost by a projected 30 percentage points in Sunday's presidential runoff to Emmanuel Macron, an economically liberal, socially responsive middle-way pro-European.

European moderates and the political establishment can release the breath they've been holding. The populist contagion that convinced 52 percent of Britons last year that their future would be brighter outside the European Union and made working-class Americans believe that a reality TV star would champion their interests from the White House has been kept offshore, quarantined, away from the heart of mainland Europe.

But for how long?

Despite the electoral setbacks, populism is down but not out, still growing in strength and influence.

Not only did Le Pen make France's presidential runoff for the first time, improving on her third place in 2012, she picked up many more than the 5.5 million votes that went to extreme-right candidate Jean-Marie Le Pen, her father, at the same stage in 2002.

In the Netherlands, despite campaigning on a meager one-page platform, Wilders' anti-Islam, anti-immigration and anti-EU Freedom Party gained five seats, becoming the second-largest party in parliament, in March elections.

Even before these advances, right-wing European populist parties saw their share of seats and votes climb from around 6 percent in the 1960s to more than 13 percent this decade, according to a 2016 study from the Harvard Kennedy School . Left-wing populist parties fared even better, from few votes and almost no seats in the 1960s to low double-digit percentages this decade.

A larger slice than ever of the French electorate, fraught with anxiety and anger about globalization's bruising impact on jobs and security, saw solace in Le Pen's promises of "French-first" protectionism, no matter how half-baked. She pledged to defend them from migrants taking jobs and benefits, murderous Islamic extremists, dog-eat-dog economic competition, the EU's open borders and open trade — in short, from the Big Bad World in general.

Even the more optimistic Macron tapped into the populist zeitgeist.

Unknown to voters before his turbulent 2014-16 tenure as economy minister, the 39-year-old positioned himself — like Donald Trump and Le Pen — as a political outsider, an agent of change. Macron's startup-style campaign caught fire. He, too, promised — although not in such earthy terms — to drain the swamp of French politics, to sweep out nepotism, replace career politicians with ordinary folk and slash by a third the number of lawmakers and senators.

The middle-class son of provincial doctors, with an elite education and a background in investment banking, Macron's champagne populism — his "I'm not like the others" spiel — stretched credulity but was still a key ingredient in his winning recipe.

In power, Macron now becomes the French state's first line of defense against the populist challenge from Le Pen and, on the far left, from Jean-Luc Melenchon, who surged late in the race.

Their combined 14.7 million first-round votes — nearly 41 percent of the total — confirmed them as formidable forces and positioned them to snap at Macron's heels from either side. To govern effectively, Macron needs legislative elections in June to deliver a working majority to his new centrist movement called "En Marche!" — "Forward!" That is far from guaranteed.

Should Macron — like Trump — prove unable to quickly turn campaign pledges into action, Le Pen and Melenchon will be even better-armed next time with vote-getting arguments.

And as populists in Europe have repeatedly proved, they don't actually need power to influence those who wield it.

In the Netherlands, Wilders' barking from the sidelines prompted Prime Minister Mark Rutte to ape some of the populist's anti-immigration language, a come-hither to Wilders voters. In an effort to undercut Le Pen, French conservatives have similarly co-opted some of her tough talk.

Although wounded by her loss, Le Pen came close enough to imagine the click of her heels on the Elysee's marbled floors.

Perhaps even more important, many of the taboos that surrounded her National Front party because of its anti-Semitic, racist and homophobic history have evaporated. A solid chunk of Le Pen voters are young. Her distrust of the outside world is now acceptable currency in a growing share of the country that produced some of humanity's greatest thinkers.

For European moderates, the job of putting the genie of populism back in its bottle is far from done.

John Leicester has reported from France for The Associated Press since 2002.