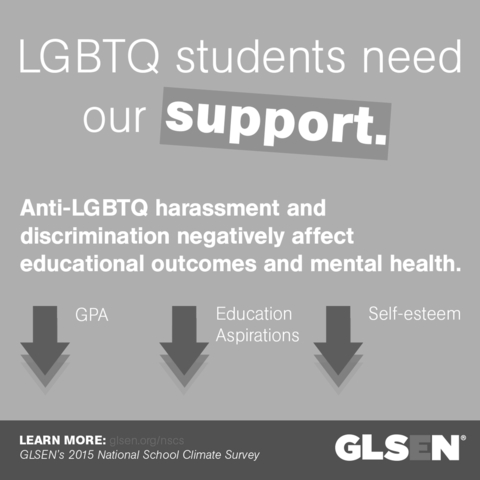 However, the report, which documents school climate, its effects on student outcomes and the availability and benefits of school-based supports for LGBTQ students, also shows significant signs of improvement in these areas since 2001.

“Although many LGBTQ students still experience harassment and discrimination, these supports can be vital for transforming school climates and helping all students thrive.”

The biennial report, which began in 1999, includes a sample of 10,528 secondary students from all 50 states and the District of Columbia. The report shows:

•Most LGBTQ students have experienced harassment and discrimination at school.Over eight in 10 (85 percent) experienced verbal harassment based on a personal characteristic, and nearly two-thirds (66 percent) experienced LGBTQ-related discrimination at school. Due to feeling unsafe or uncomfortable, nearly a third (32 percent) of LGBTQ students missed at least one day of school in the last month, and over a third avoided bathrooms (39 percent) and locker rooms (38 percent).

•School-based supports, often still lacking but generally growing in availability, have a positive effect on school climate.LGBTQ students in schools with a GSA or a comprehensive anti-bullying policy experienced lower levels of anti-LGBTQ victimization. Also, LGBTQ students with an LGBTQ-inclusive curriculum were more likely to report that their classmates were somewhat or very accepting of LGBTQ students (76 percent vs. 42 percent). However, though it was the highest percentage ever recorded, only 22 percent of LGBTQ students were taught positive representations of LGBT topics in their classes.

•School climates are slowly improving for LGBTQ students.LGBTQ students reported a decrease in homophobic remarks compared to all prior years. The incidence of harassment and assault related to sexual orientation was also lower than in all prior years. Changes in harassment and assault based on gender expression were similar to those for sexual orientation.

An executive summary, the complete report and shareable infographics can be found at glsen.org/nscs.

About GLSEN -GLSEN champions safe and affirming schools for all students and envisions a world in which every child learns to respect and accept all people, regardless of sexual orientation or gender identity/expression. Each year, GLSEN programs and resources reach tens of thousands of K-12 schools across the United States, and our network of chapters brings GLSEN’s expertise to their local communities. For more information on GLSEN’s policy advocacy, student leadership initiatives, public education, research and educator training programs, please visitglsen.org.
_