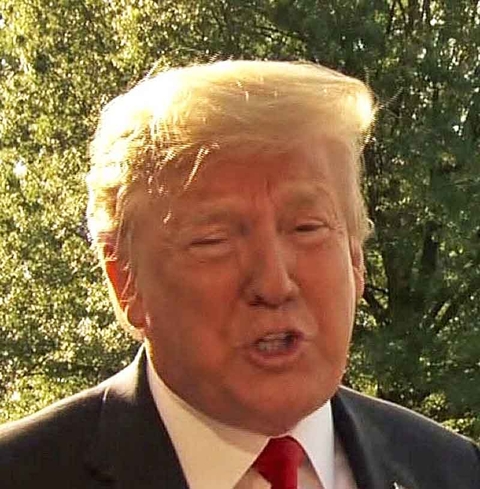 One day after special counsel Robert Mueller publicly refused to exonerate President Donald Trump and hinted at potential impeachment, the President responded Thursday with an avalanche of widely debunked lies about the investigation and its findings.

Over a few hours Thursday morning, Trump spread several lies and falsehoods about the Russia investigation, Mueller's findings, the cost of the probe, and the legal restrictions that Mueller faced when grappling with the possibility of a President who broke the law. 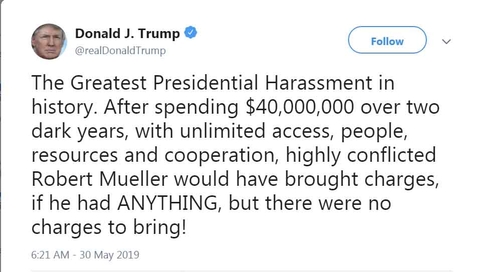 Here's a breakdown of Trump's comments in one tweet.

Cost of the investigation

Facts First: It's not clear where Trump is getting his numbers. The latest information from the Justice Department goes through September and says Mueller-specific expenses were around $12 million. Mueller's final price tag will be higher than that, but the data isn't public yet.

The Justice Department spent another $13 million investigating Russian meddling, costs that would have been incurred even if Mueller weren't appointed. That's a total of $25 million, though the price tag will be higher because that doesn't cover the last seven months of the probe. It's unlikely that the final amount for Mueller will reach the $40 million figure claimed by Trump.

Cooperation with the probe

Facts First: The White House largely cooperated with the investigation, but it's wrong to say there was "unlimited" cooperation. Trump repeatedly refused a sit-down interview with Mueller's team. Some Trump campaign associates "deleted relevant communications" or gave conflicting information. Others lied to investigators and were charged with obstruction offenses.

Trump submitted written testimony about Russian meddling but refused to answer any questions about obstruction. Mueller made it clear that Trump's responses were "incomplete" and insufficient. The President's son, Donald Trump Jr., also declined an in-person interview.

In the tweet, Trump said Mueller was "highly conflicted."

Facts First: Mueller did not have conflicts of interest, and Trump knows it. The Justice Department cleared Mueller of any conflicts when he took the job in 2017. Trump's top aides told him that these perceived conflicts were "ridiculous" and were not considered true conflicts.

Trump has long claimed that Mueller was conflicted for a few reasons: Because he once sought a refund from a Trump-owned golf course, because he interviewed to be FBI director after Trump fired James Comey in 2017, and because his old law firm represented key figures in the investigation.

When Trump raised these concerns with his top aides, they "pushed back on his assertion of conflicts, telling the President they did not count as true conflicts," according to the Mueller report. These White House aides included former chief strategist Steve Bannon, former chief of staff Reince Priebus and former White House counsel Don McGahn, according to the report.

In the tweet, Trump said, "Robert Mueller would have brought charges, if he had ANYTHING, but there were no charges to bring!"

Facts First: This is the opposite of the truth. Mueller's hands were tied by longstanding Justice Department guidelines that a sitting President can't be indicted. In his public comments this week, Mueller specifically said charging Trump was "not an option we could consider."

Mueller made it clear in his public comments on Wednesday that the guidelines had a significant influence on the investigation, tying his hands from the very start from even considering whether a crime had been committed. Trump is therefore creating a false narrative by asserting that Mueller "would have brought charges" if there was evidence Trump broke the law.

In fact, Mueller's report presented substantial evidence that Trump obstructed justice on a few fronts. But Mueller didn't offer a conclusion on whether Trump should be prosecuted, because he was bound by Justice Department guidelines that stopped him from even considering it.