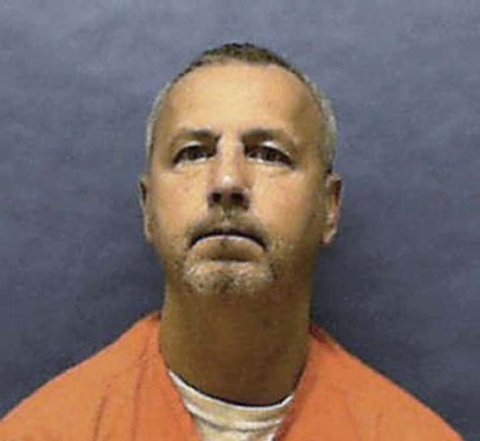 Florida is set to execute a man known as the "I-95 killer" who was convicted of killing three people and admitted to killing several more in a 1994 spree in which he targeted gay men.

Gary Ray Bowles, 57, is scheduled to be executed by lethal injection at 6 p.m., said Michelle Glady, communications director for the Florida Department of Corrections. He woke up at 4 a.m. and was calm and in good spirits. His last meal was three cheeseburgers, french fries and bacon, she said.

The FBI began a national search for Bowles in 1994 after they determined he was killing gay men at locations near the highway from Florida to Maryland, according to the Daytona Beach News-Journal. Once on the FBI's most-wanted list, he was arrested in November 1994 in Jacksonville Beach going under an alias.

He also was later featured in an episode of A&E's show The Killer Speaks as the "I-95 Killer."

Bowles pleaded guilty to first-degree murder in 1996 for killing Walter Hinton in Jacksonville Beach, Florida by dropping a 40-pound cement stepping stone onto his sleeping head. Bowles then strangled him and stuffed toilet paper and a rag in his mouth, court documents show. His body was found inside his locked home wrapped in sheets and bedspreads, the documents say.

In addition, he was convicted of first-degree murder in 1997 for robbing and killing John Roberts by strangling him and stuffing a rag in his mouth, according to court documents. He also was convicted in 1996 of murder for killing Albert Morris in a case in which he struck Morris in the head, beat him, shot him, strangled him and tied a towel over his mouth. He was sentenced to life in prison for both of those cases.

Bowles had several previous charges and was sentenced to prison for beating and raping his girlfriend in 1982.

Bowles is set to become the 99th person to be put to death in Florida since capital punishment resumed in 1976. Bobby Joe Long, who was convicted for killing eight women in the Tampa Bay area in 1984, was executed by the state in May.

The executive director of the Florida Conference of Catholic Bishops sent a letter to Gov. Ron DeSantis last week urging him to stop the execution. The organization said Bowles had survived many years of childhood abuse, years of homelessness and child prostitution.

"Intentionally ending Mr. Bowles' life is unnecessary," Michael B. Sheedy wrote in the letter. "Society can remain safe from any future violent actions of his through life-long incarceration without parole."