Former OKC Pride President has open warrant under an alias 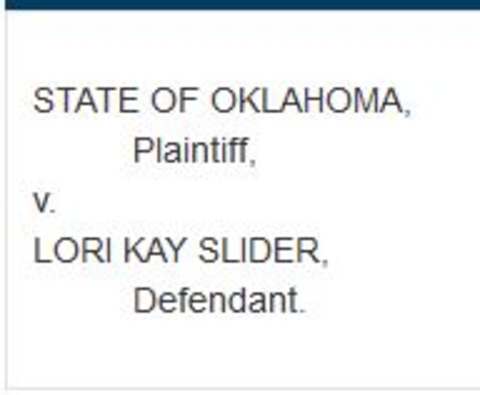 "Slider" is a name used as an alias by former OKC Pride President Lori Honecutt.

In our past coverage, The Gayly has reported that the former OKC Pride President, Lori Honecutt, uses many aliases. The Gayly has obtained information from the Oklahoma Supreme Court Network, a public site, that Lori Kay Slider, one of Honecutt’s aliases, has an outstanding warrant. The date of birth matches that of Honecutt. Slider is a former legal name she used, and the same name she had when she served time in prison.

In July 2018, The Gayly obtained information from an OSBI report finding multiple convictions for Honeycutt under the many aliases/former names she has used. These names are Lori Kay Honeycutt, Lori Kay Downs, Lori Honecutt, Lori Kay Slider and Laurie K. Shlider. She now also uses the name Standifer.

The charge under the name Slider: Obtaining property by trick/deception of false representation/pretense. The date of the offense was September 05, 2019, but the charges were filed about three months ago on March 13, 2020.

On March 4, Honecutt (Slider, Standifer) entered a blind plea in Oklahoma County (Case number CF18-4418) to one count of embezzlement, having taken monies obtained for the use of OKC Pride. On March 4, she was ordered to pay restitution of over $12,000 to the court before her sentencing on May 15. She was released from the May 15 court date because she claimed she might have been exposed to COVID-19.

Her sentencing date has been rescheduled to July 31, 2020, for the embezzlement charges under the name Honecutt.

We will keep you informed on the status of the open warrant under the name Slider as details become available.