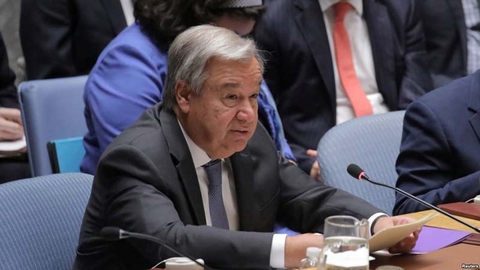 In a speech on Wednesday at the United Nations gathering in New York City, U.N. chief Antonio Guterres gave a power speech supporting the LGBTQ+ community.

He also warned more action needs to be taken because words have no real affect in places such as his homeland Iraq.

"The secretary-general and the U.N. need to constantly ... and actively work on encouraging them to change policies," he said.

Now, in more than 70 countries it’s illegal to partake in same-sex relationships.

However, more and more places are making the change and accepting people for who they are.

Places such as India who earlier this month abolished a law making it illegal to be in a same-sex relationship.

"Many ... [LGBTI community] members are imprisoned, abused and even killed simply for who they are or whom they love," he said on the sidelines of the annual meeting of world leaders. "But so long as people face criminalization, bias and violence based on their sexual orientation, gender identity or sex characteristics, we must redouble our efforts to end these
violations.”

According to deputy director of OutRight Action International, Maria Sjödin, it’s important to expand progression to the future.

"It's great, as we've been waiting to get something longer and more substantial than just a response to a couple of questions that he's had before," she said. "It's really important not to backslide and to ensure that the human rights of LGBTI people continue to be a priority for the U.N. and the secretary-general."

"More than 70 countries criminalize consensual same-sex relationships, and also criminalize transgender people based on their appearance," she said. "These laws subject LGBT people to long prison sentences, and in some cases physical punishment. They also implicitly encourage prejudice, hatred and violence. But laws can change."