Case number provided to The Gayly after meeting with OKCPD in January.

Oklahoma City police department (OKCPD) officials said Alexander Tilghman had not been on local authorities' radar for over a decade.

OKCPD Capt. Bo Mathews said the last contact police had with him was in 2003, when he was arrested as a 13-year-old juvenile for assault and battery.

The Gayly contacted OKCPD regarding Tilghman in January after publishing a disturbing interview, where Tilghman described his mission to warn OKC of "demons in cloned transexual bodies."

The Gayly handed over a transcript of the interview with Tilghman, as well as supplemental documents relating to the investigation. 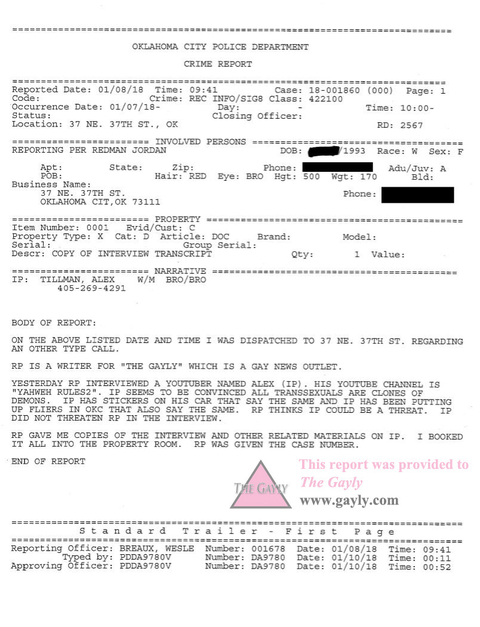 When addressing media concerns regarding reports of Tilghman's past behavior, OKCPD said a database search revealed no recent reports made on the now deceased OKC shooter.

The Gayly contacted MSgt. Gary Knight, Asst. Public Information Officer for OKCPD in regards to the report made in January.

"It looks like his name is spelled differently on this report, which is why it didn't pop up when we searched for him," explained Knight.

No further action was taken after OKCPD's field officer who conducted the investigation "at the scene," concluded Tilghman was not a threat.

"Usually, an officer at the scene is the primary investigator on a case because he is actually there. There was nothing in that interaction that led anybody to believe this man would go and do what he did," concluded Knight.

Capt. Mathews further explained, "It’s not against the law to have a mental illness. ... No crime was committed [at the time of this report], no one was in danger."

The FBI reviewed its databases and found it had received a call earlier this month about Tilghman's YouTube channel, said the FBI's Andrea Anderson in a report by the Associated Press.

"The caller ... did not report any potential threat of violence and did not have any knowledge of the subject possessing any weapons," Anderson said. "Based on this information, and following our standard protocol, no further investigation was warranted.

"In addition, earlier this year, FBI Oklahoma City Division had received an informal tip regarding the same YouTube channel. The content found on this channel at that time was identified as First Amendment-protected speech, and no further action was taken."

Tilghman opened fire at an Oklahoma City restaurant and shot three people, another man was injured while fleeing before the gunman was fatally shot by two armed citizens.