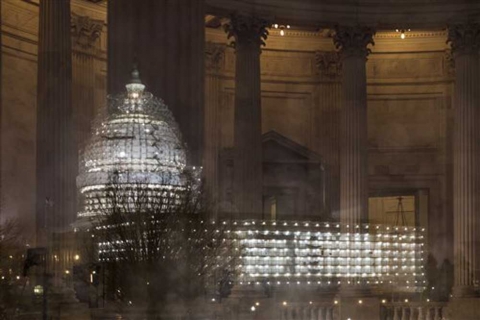 Congress increasingly is being defined by what it's not doing this election year. Photo by J. Scott Applewhite, AP.

WASHINGTON (AP) — Congress increasingly is being defined by what it's not doing this election year.

The Senate returned Monday with a strong majority of Republicans saying no to any consideration of President Barack Obama's nominee to the Supreme Court. No hearings, no vote and, for some lawmakers, not even a meeting with federal appeals court Judge Merrick Garland.

Republicans, led by Majority Leader Mitch McConnell of Kentucky, insist that the decision on filling the court vacancy rests with the next president after voters have their say in November's election.

A bipartisan bill to aid Flint, Michigan, where the city's 100,000 residents are struggling with lead-contaminated water, is being blocked by Sen. Mike Lee, R-Utah. He says he wants to ensure that the money is paid for without adding to the deficit. The dispute over Flint has snagged a far-reaching measure on energy.

In the House, where lawmakers return from their break April 12, conservative opposition probably will make it impossible to pass a budget, in what would be a major embarrassment for Speaker Paul Ryan, R-Wis. A GOP proposal to aid debt-stricken Puerto Rico has drawn criticism from House Democrats and conservatives, raising doubts about Congress' ability to resolve the issue.

Neither the House nor Senate has done anything with Obama's request for $1.9 billion in emergency funding to combat the Zika virus. Republican leaders on the House Appropriations Committee have been going back and forth with the White House budget office and agency officials over whether to reallocate money left over from the 2014 fight against Ebola.

The latest Gallup Poll shows public approval of Congress at an abysmal 13 percent. Yet, through a half-dozen state primaries, no incumbent lawmaker has lost.

A look at the issues in limbo in Congress:

THE FIGHT OVER GARLAND

Garland plans to meet with 11 senators in the week ahead, including two Republicans. Democrats are maintaining election-year pressure on the GOP for blocking the usual Senate committee hearings and vote on a high-court nominee.

Sens. Susan Collins, R-Maine, and John Boozman, R-Ark., are set to sit down with Garland on Tuesday. Collins is one of just two Republicans out of 54 who are open to hearings and a vote on Garland; Boozman is up for re-election this year. Republican Sen. Kelly Ayotte of New Hampshire, also up for re-election this year, said Monday that she will meet with Garland next week.

Over the Senate's two-week recess, both sides pushed their messages back home, but Democrats were particularly aggressive as senators held news conferences and wrote newspaper columns. Swing-state Republicans facing re-election were top targets, including Sens. Ayotte, Rob Portman of Ohio and Iowa's Chuck Grassley, the chairman of the Senate Judiciary Committee, responsible for holding hearings on judicial nominees.

Garland has met with just one Republican: Illinois Sen. Mark Kirk. He is embroiled in a difficult re-election fight and has said the Senate should provide "rational, adult, open-minded consideration" of Garland, an Illinois native.

At least 15 GOP senators have said they are willing to meet Garland, though most oppose letting the confirmation process progress.

"That's not what the American people want," Minority Leader Harry Reid, D-Nev., said Monday. "They want Republicans to do their constitutional duty and give these judges due consideration."

It's been years since Congress approved each of the annual appropriations bills — the 12 measures that fund the budgets of agencies and departments. The new normal is an all-encompassing bill at the end of the year. Republicans leaders such as McConnell want to get the process back on track, and the Senate Appropriations Committee is expected to start with this work during the week of April 11.

It'll be a test for the Senate, and pitfalls await, including potential fights over immigration, environmental regulations, gun rights and display of the Confederate flag.

In the House, GOP leaders are still trying to win approval of a broader budget plan that's usually a precursor to action on the spending bills. Chances are iffy at best. The way forward on the appropriations bills is unclear.

House Republicans unveiled a plan to help financially-strapped Puerto Rico with its $70 billion debt, but a draft bill by the chairman of the House Natural Resources Committee, GOP Rep. Rob Bishop of Utah, was rejected by Democrats, GOP conservatives and Puerto Rican officials.

The proposal would create a five-person board designed to audit the territory's government and create fiscal plans and budget measures — steps Republicans say are necessary for Puerto Rico to get its economy back on track. The board would have the authority to enact the plan if the territory's governor and legislature failed to do so.

The draft would not give Puerto Rico the broad bankruptcy authority it has asked for, but would allow the oversight board to facilitate court-supervised debt restructuring in some cases. The House Republican Study Committee, a group of around 170 conservatives, expressed concerns about those debt restructuring provisions, as did the conservative advocacy group Heritage Action for America. Democrats said the oversight board would be too controlling.

Puerto Rico's government has defaulted on $37 million in interest on bonds issued by Puerto Rico's Infrastructure Financing Authority, as well as nearly $60 million in Public Finance Corporation bonds. Gov. Alejandro Garcia Padilla has warned there is no money for future payments.

Bishop said he will continue to work on the bill to gain consensus.

Advocates for a criminal justice overhaul are hoping Congress will move legislation in both chambers before the summer, though the effort has run into roadblocks in the Senate.

The GOP caucus is split over a bipartisan bill that would give judges the discretion to impose lesser sentences than federal mandatory minimums and eliminate mandatory life sentences for three-time, nonviolent drug offenders.

Some conservatives, including Arkansas' Tom Cotton and GOP presidential candidate Ted Cruz of Texas, say the bill could release violent offenders from prison. It's a charge that their GOP colleagues backing the bill strongly deny.

Senators are rewriting parts of the bill, but even with the expected changes, it's unclear whether McConnell will choose to move forward.