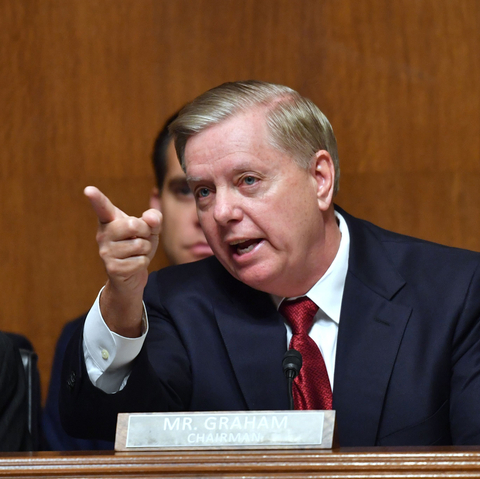 Republican Sen. Lindsey Graham, one of President Donald Trump's strongest allies on Capitol Hill, declined on Monday to condemn the President over his racist tweets against several minority members of Congress, instead calling them a "bunch of communists."

Graham's comments, which were later tweeted out by Trump, are the latest example of congressional Republican alignment with Trump in the face of fierce controversy.

"Well, we all know that (New York Rep. Alexandria Ocasio-Cortez) and this crowd are a bunch of communists, they hate Israel, they hate our own country," Graham said during an appearance on "Fox and Friends." "They're calling the guards along our border, the border patrol agents, 'concentration camp guards.' They accuse people who support Israel of doing it for the Benjamins. They're anti-Semitic. They're anti-America."

But Graham has changed his tune on Trump since 2015 when he called then-candidate Trump a "race-baiting, xenophobic bigot" on CNN's New Day.

Asked by co-host Steve Doocy if he thinks Trump "went too far" with his comments, Graham, who represents South Carolina, said the President should "aim higher" than the personalities of the congresswomen and instead talk about their policies.

"You don't need to -- they are American citizens. They won an election. Take on their policies," he said.

Graham added that if the group of lawmakers are made "the face of the future" of their party, "You will destroy the Democratic Party."

Shortly after Graham made the comments, Trump shared them in a tweet, writing, "Need I say more?"

On Sunday, Trump, without naming the lawmakers, implied in a series of tweets that the group of freshman House Democrats that includes Ocasio-Cortez, Reps. Rashida Tlaib of Michigan, Ilhan Omar of Minnesota and Ayanna Pressley of Massachusetts, weren't born in America and sarcastically suggested, "they go back and help fix the totally broken and crime infested places from which they came."

Ocasio-Cortez, Tlaib and Pressley are natural-born US citizens, while Omar was born in Somalia and immigrated to the US when she was young. Omar became a citizen in 2000 when she was 17 years old, according to The New York Times.

Omar and Tlaib have all stirred controversy in the past for comments they made that some described as anti-Semitic. Omar came under intense scrutiny earlier this year for a number of comment she made, including ones suggesting Republican support of Israel is fueled by donations from the American Israel Public Affairs Committee, a prominent pro-Israel group. Omar later apologized for the remarks.