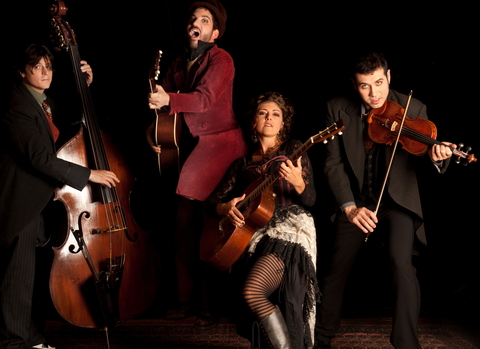 (Oklahoma City, OK) Connecticut-based band Caravan of Thieves brings their unique and theatrical blend of pop-infused gypsy jazz back to Oklahoma City for a show for all ages at 7pm on Sunday, November 17 at Sauced on the Paseo. Local acoustic comedy band The Memepunks will open the show. In lieu of a cover, there is a suggested donation of $15.

Caravan of Thieves was founded by married singer-songwriters Fuzz and Carrie Sangiovanni (guitar, vocals, various percussive “instruments”). “It started as a romantic, bohemian vision of a couple making music, performing on the road, in parks, venues, traveling around and avoiding responsibility as much as possible,” says Fuzz. “The first thing we discovered was we loved singing together, harmonizing our voices. Just seemed to click right away.”

In the spring of 2008, Fuzz and Carrie extended their family to include fiery violinist Ben Dean and double bass madman, Brian Anderson completing their colorful vision. Since then, the four of them ran away from home and never looked back.

“The years spent making music as an acoustic duo, alongside street performers, forced us to create a style of music we can present anywhere, anyhow, plugged in or not, a little wild and raw,” adds Carrie addressing the palpable troubadorian nature of Caravan Of Thieves. “And this seemed to be a characteristic of popular artists and performers who have developed their persona and style that continue to span generations.”

Driving gypsy jazz rhythms, acoustic guitars, upright bass and violin lay the foundation for mesmerizing vocal harmonies and fantastic stories. It’s theatrical and humorous. Caravan of Theives is musical and intense. It entertains, dazzles and defies classification while welcoming the spectator to join the band throughout the performance in momentary fits of claps, snaps and sing-alongs. If Django Reinhardt, the cast of Stomp and the Beatles all had a party at Tim Burton’s house, Caravan of Thieves would be the band they hired.

Caravan Of Thieves will also perform songs from their most recent album, "The Funhouse."