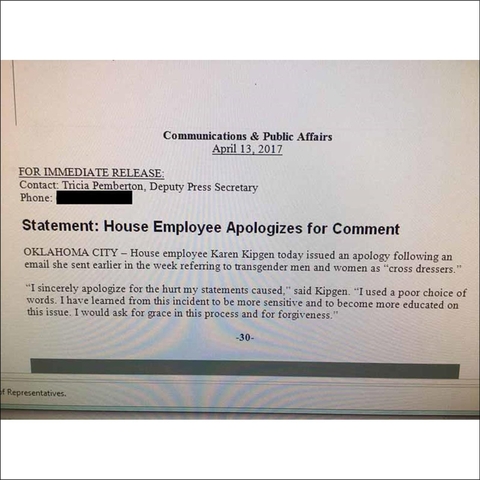 Karen Kipgen, the Page Program Supervisor for the Oklahoma House of Representatives, apologized for referring to transgender men and women as “cross dressers.” Kipgen’s statement says, “I sincerely apologize for the hurt my statements caused. I used a poor choice of words. I have learned from this incident to be more sensitive and to become more educated on this issue. I would ask for grace in this process and for forgiveness.”

The Gayly contacted the House Press Secretary’s office, asking for an interview with Kipgen, but the office refused, saying Ms. Kipgen wanted her statement to be her apology.

Earlier this week, Kipgen sent an email to legislators and pages saying, “As per the Speaker’s office, Pages are being allowed access to the ladies restroom across from 401, for today. Again, there are cross-dressers in the building.”

There were groups of students organized by Oklahomans for Equality (OkEq) in the capitol to lobby for school funding. Toby Jenkins, Executive Director of Oklahomans for Equality, said, “We arrive and we have several transgender and gender non-conforming kids in our group. They’ve been visiting legislators and using the bathroom they are comfortable with.”

Many of the students were hurt by the remarks in the email. The group of students went to House Speaker Charles McCall’s office for an explanation. The Speaker had not been aware of the email until the students arrived.

Speaker McCall later issued a statement saying, "The email was not authorized by me, my staff or my office. It was sent unilaterally by a House staff member without any input or permission. I was unaware that such an email was being sent, and the remarks contained in the email are not condoned by me or the Office of the Speaker. As Speaker, all Oklahomans should feel welcome in the Oklahoma Capitol building. We are looking into this matter, and it will be taken seriously.”

There was no explanation why an apology took four days to be made.

The incident has raised calls for diversity and sensitivity training for the legislature. State House members and staffers apparently need "some kind of training or course on how to make all Oklahomans feel welcome in their state Capitol," Rep. Emily Virgin said Wednesday.