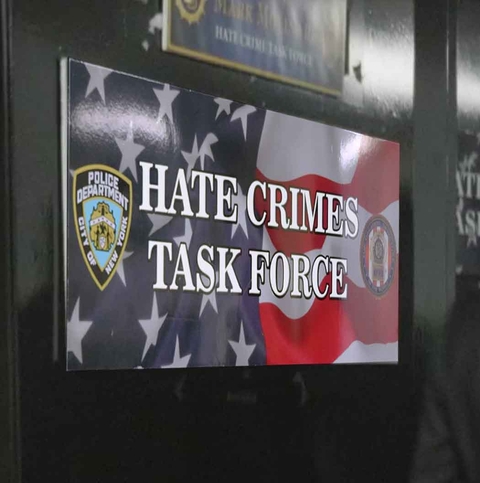 When a subway ride in Queens last November became the setting of an anti-gay attack, New York Police turned to a team set up for just such an incident: the Hate Crimes Task Force.

Just two weeks later, a 54-year-old man was arrested in the case. And that swift resolution, detective Ashley Breton told CNN, was one of the most memorable cases he's solved since he decided to join the prestigious task force two years ago.

CNN recently spoke to Breton and other members of the Hate Crimes Task Force as New York City is set to host WorldPRide, an international celebration of the LGBTQ movement in June. This year also marks the 50th anniversary of the Stonewall Uprising, the series of riots in Greenwich Village that is considered a turning point for the modern gay rights movement.

Deputy Inspector Mark Molinari, the commanding officer of the Hate Crimes Task Force, said he has not seen a hate crime incident at a Pride event in New York City. And his team is working with the FBI and the Department of Justice to keep it that way.

"As far back as I've looked up, I've never seen an incident related to Pride Week," Molinari said. "But as a response unit to an event, we have to be ready to respond."

But their absence at Pride does not mean hate crimes aren't an issue in a city as diverse as New York. There were a total of 353 hate crime complaints in 2018, according to data from the NYPD.

For Molinari and the Hate Crimes Task Force, each one is important, no matter its severity.

"Criminal mischief, swastikas, property damage are no different to us than robberies and assaults. They're all victimizing an entire community -- sometimes a world-wide community -- so not being able to get closure for that community is difficult for all of us here," Molinari said.

"Our cases don't just victimize the victim. They victimize a group," he added.

How the task force works

The Hate Crimes Task Force was launched under Mayor Rudy Giuliani in 2000 as part of an initiative to enhance hate crime investigations and prosecutions.

"Every hate crime is a crime against our city, since it strikes at the diversity upon which New York thrives," Giuliani said at the time.

It's now made up of 17 detectives and is called into action when investigators believe that a crime has some elements of bias. At that point, a task force detective will go and interview the victim, inspect the scene and conduct other investigative work.

Many of the task force's members have diverse backgrounds or language skills that come in handy when speaking with victims and their communities. Detective Breton, for example, speaks French, and his partner Salah Ali speaks Arabic. Ali said he joined the task force specifically because he thought his background as a Muslim of Arab descent would be of value to the team.

"A place like this there's definitely a lot of great feelings when you do find the perpetrators, and you give the victims justice and be able to give them peace of mind," Ali said.

"Because once they are victimized in this type of cases it's hard. It's not your typical assault. There's a lot of trauma that goes into it because of the way they are being targeted because of their race, religion, gender," he said.

Molinari said some detectives average two to three cases a month. And that low case load means they get to work their cases hard, he said.

However, Molinari said they have seen spikes in hate crimes during the last few election seasons.

"Looking back over (a) 25-year history, any world events that go on usually causes a little bit of a spike," he said.

But overall, he said not all LGBTQ hate crimes are reported to police because of the victim's fears.

"I've read reports on that victims are afraid of being outed if their family, their friends, their employer don't know their sexual orientation or gender they identify as," he explained. "They don't want to report to the police because then they're going to be outed that they were attacked for their gender (identity) or sexual orientation. So that is a stumbling block for us."

The majority of hate crimes in New York City are anti-Jewish, and they are primarily instances of property damage, such as swastika graffiti or broken property, Molinari said.

Anti-LGBTQ hate crimes, on the other hand, tend to be physical confrontations, Molinari said.

"When you're getting into LGBTQ (hate crimes), a lot of them are more personal interaction," he said. "There's aggravated harassments, which (are) just basically a threat or a push with some slurs thrown in, or because their identities are related, or assaults coupled with derogatory language."

For example, in March 2017, a man stabbed two people and threatened another outside a gay night club in Brooklyn in what police said was an anti-gay attack.

The Hate Crimes Task Force investigated, and a 34-year-old local rapper turned himself into police after surveillance video of the incident was released. The man was found guilty earlier this year and sentenced to 21 years in prison, the Brooklyn district attorney's office said.

Focusing on the victims

While the Hate Crimes Task Force focuses on finding the perpetrator of a hate crime, a related group focuses on the victims.

Kathryn Clark-Hilliard is the manager of the Crime Victims Assistance Program, which works in partnership with the NYPD to put victim advocates in every police precinct in all five boroughs of New York. Their job is to work with crime victims who may be fearful or traumatized and provide them with support and resources.

"It can be very traumatizing after (an attack), and to be able to have an advocate that's able to talk with them in the precinct and link them to services that they may not even know about can be really supportive," Clark-Hilliard said.

Clark-Hilliard said that work can mean setting victims up with community-based organizations, counseling or walking them through the police process ahead of them.

"For someone that has experienced a hate crime, that is really an attack on their identity," she said. "It affects their personhood because, essentially, they feel that something that's true to themselves has been really attacked, and that can leave them feeling quite vulnerable."