The humanity of differences - Part two 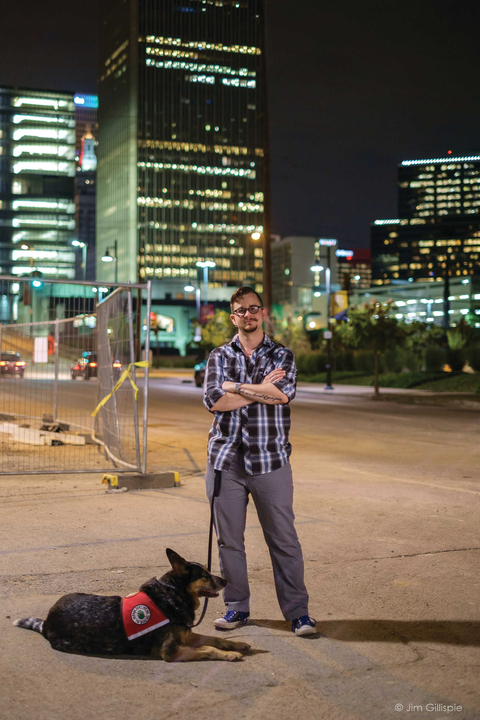 The first part of Steven L. Williams’ article ran last month. You can read it on page 14 of the January print edition of “The Gayly”, or online at www.gayly.com. In part one, he named three lessons. The first was about his perfectionism, which silences us by insisting that questions are a sign of weakness. The second is, when I have question about an issue, I need to listen to those most gravely affected. And third, that anger is not at odds with love and nonviolence.

How did this 30-something, white, student minister come to these three lessons (perfectionism, listening and that anger is not at odds with love and nonviolence)? Let me share the rest of my story with you.

Though I don’t know what it’s like to be a person of color, I do know what it’s like to live in fear of the police. At nineteen, I was a queer, trans, anarchist punk in New Orleans. I survived capitalism by waiting tables, tending bar, and chemically altering my mind along with other poor white kids who congregated around Jackson Square at night.

We were a hodgepodge of subcultures—punks, goths, anarchists, ravers, runaways, train-hoppers, potheads, and queers—but we were collectively and not so affectionately known as “Quarter Rats” by the local gentry. The police were there to serve and protect “them” from “us”, even though realistically, we weren’t a danger to anyone but ourselves.

No one wants a trip to jail, and for a trans person, a trip to jail might mean a trip to the hospital or morgue. Fortunately, I managed to escape arrest but I knew of the horror stories from my fellow gender nonconformists. For this and many other reasons, we - the Quarter Rats and the queers - didn’t trust the police.

They selectively enforced laws against us while turning a blind eye to the drunk, obnoxious tourists. They sought us out. They followed us. They kicked us out and ran us off. The society they served and protected had no place for us, so we made our own place in the margins of it - and we weren’t welcome there either.

I understand cycles of poverty, marginalization, addiction, and poor health. I find it significant that we were an almost -  exclusive white group. What was missing from our analysis was race. It was the one privilege we had and thus we were blind to its impact.

If you had asked any of us if we were racists, we’d have laughed in your face. Still, we didn’t hang out with any black kids in a city that was almost two-thirds African-American. We’d be the first to tell you not to go past North Rampart street because it was “dangerous.” We were scared of poor Black people, even though we had more in common with them than we did with the middle- and upper-class white people who lived in the Quarter.

I can take off my flak jacket, dye my hair a natural color, put on a clean polo and khakis, and get a tip of the hat from a passing cop—whether I obeyed the law or not. I can hide my differences and my skin would protect me. People of color can’t hide their differences because they can’t take off their skin. It doesn’t matter what they wear.

It doesn’t matter if they, like Philando Castile (who was shot last summer in St. Paul, MN), are college-educated with a successful career and no criminal record. It doesn’t matter if they have a four-year-old in the backseat. People of color can follow all the rules, right up to telling the officer that they have a legal, concealed carry firearm and they’re going to reach for their wallet—and they can still get shot for just being there and being black.

Philando and I had a few things in common. We were the same age. We had bachelor’s degrees from state schools. We’d studied and/or worked in education. We have loved and nurtured the youth in our lives. We have been father figures to our partners’ children.

But, he did nothing wrong and he is gone. His family is without a son, a partner, a father. And I hung out with the wrong people in the wrong places at the wrong time and never got more than empty threats from the police. I got a chance to turn my life around and Philando never went down that road in the first place. Some of this is chance, but much of this is race.

This is why I unequivocally stand with the value that Black Lives Matter to me. I am no longer willing to sacrifice my humanity to a white supremacist system. I am writing these imperfect words, and will keep writing, speaking, connecting, and listening. And I will never allow my broken-open heart to shut off to others’ humanity—no matter how much it hurts.

A copy of this first ran in the Fall copy of “Beyond Belief”, produced by All Souls Church.
_