The inauguration from an LGBTQ perspective 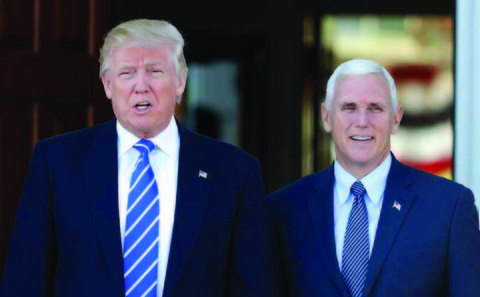 The inauguration of President-Elect Donald Trump will take place in Washington D.C. on January 20. The world will watch with either pride, fear or indifference as the next President of the United States is sworn into office.

Anxiety is held in the hearts of many as we say goodbye to the Obama Administration, who gave us eight dedicated years of progress, grace and light-heartedness.

President Obama has, and always will be, a man who sets the stage for progressive change. He was elected as the first African-American president of the United States and, in 2013, he was the first president to address the LGBTQ community during an inaugural address.

“Our journey is not complete until our gay brothers and sisters are treated like anyone else under the law,” said the President. “For if we are truly created equal, then surely the love we commit to one another must be equal as well.”

It was a statement that was met with applause and gratitude. Finally, we thought, finally we have a President who is publicly and vocally on our side.The LGBTQ community felt protected, maybe for the first time in history.

America now welcomes in an entirely new, and seemingly unfamiliar, administration. It is one with a level of uncertainty and unpredictability. Nonetheless, we respectfully acknowledge the American people and the next President that has been chosen.

President-Elect Trump will take the same stage that forty-four men before him took and administer his inaugural address. His focus may be largely on the economy, but the marginalized groups will wait in anticipation.

Trump’s campaign was made famous by his disregard and cruelty towards minorities and women. The wall he has promised is no longer metaphorical, but is dividing this great nation right down the middle. We as LGBTQ citizens, are left to wonder what side of the wall we will fall on.

Donald Trump’s agenda for LGBTQ people seems unclear. He has considered himself to be an open-minded New Yorker but his choices for Cabinet positions and the Supreme Court have the community on edge. Trump has also said that he does not support marriage equality nor will he support civil benefits for same-sex couples.

We aren’t left with much of a choice but to remain optimistic over the upcoming presidency, but don’t bet on a Trump acknowledgement at the inauguration. His words have pierced the hearts of many marginalized groups, we are no exception. We can only hope that he respects the rights of the citizens in the country he represents. In his address, we will cross our fingers that he follows in the footsteps of some of the great leaders before him – platforming on inclusivity, diversity and freedom for all in this great nation.
_