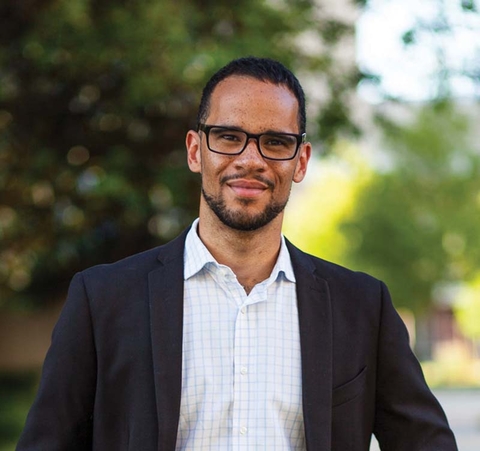 At 36-years-old, Cooper says he’ll bring the Council his experiences as a teacher, trustee, and adjunct Film Studies professor at Oklahoma City University.

“I’m committed to service,” Cooper said. “As someone who participated in our two-week teacher walkout, I’m ready to fight for better schools, safer and stronger neighborhoods, reliable public transit, and to preserve and revitalize our diverse historical districts.”

“With MAPS 4 coming soon,” Cooper said, “we have an opportunity to connect residents and neighborhoods to our city’s recent renaissance, particularly to the progress we’ve seen in Bricktown, Midtown and Downtown. We can build on our success stories across northwest OKC—Paseo, Uptown 23rd, the 39th Street District, the Asian District, etc. —and create better-connected communities.

“We can work together to defend the character and affordability of our inner-city neighborhoods.”

Cooper says living in Paseo—and, learning its history as OKC’s first commercial district outside of downtown—inspired his Council run. He notes how the district’s original architect designed Paseo in 1929 so residents could leave their home, walk safely to nearby stores, have access to basic needs and, when necessary, take the trolley downtown or to other places around the city.

“Our city’s founders understood the importance of living in walkable neighborhoods,” Cooper said. “We can learn from our past and build a stronger city that works for everyone.

“Millennials—my generation—want to live where we can walk, bike, and take public transit to where we need to go. Baby Boomers want to age in place with dignity, to stay in their homes and neighborhoods, to have access to grocery stores, senior wellness centers, pharmacies, and doctor appointments rather than move to nursing homes. Our K-12, Vo-Tech, and college students want and deserve safe neighborhoods with access to quality schools.”

“We have a lot of people in pain,” Cooper says, “but, we’re a resilient community. Together, we can work to help people heal so they become healthier, happier members of our city.”

Cooper says excess MAPS 3 sales tax revenue generated due to the city’s booming economy should focus on building an additional senior wellness center and ensuring adequate funding to the streetcar system, part of his emphasis on better connecting residents to basic services with dependable public transportation.

He also suggests, if funds allow, building more sidewalks and trails, as well as enhancing the new downtown MAPS 3 Scissortail Park with the reinvigoration of historic Union Station.

Cooper says he’ll build on the progress he’s fought for and won on OKC’s transportation board, including Embark’s expansion of night service till midnight on five routes and the recent addition of Sunday bus service.