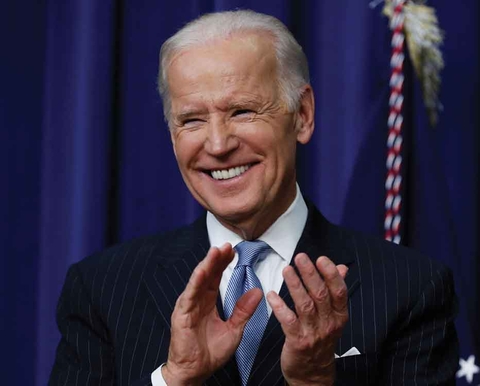 “My mother used to have an expression,” said Vice President Joe Biden in 2014 at a Human Rights Campaign (HRC) dinner in Los Angeles, “and I’m serious about this, she said, ‘Joey, bravery resides in every heart, and the time will come when it will be summoned.’”

Through eight years as Vice-President, and for many years in the Senate, we have seen that bravery. Joe Biden has long been a champion of LGBTQ rights and of everyone’s civil rights.

And we will miss having him on the national stage. But for friends like this, as they exit that stage, it is our responsibility to thank them. And to hope that they aren’t really going to stop talking. Knowing Joe Biden, it’s highly unlikely that he will stop talking.

Biden, like Barack Obama and Hillary Clinton took a while to come to terms with marriage equality. But it was the Vice President who got the jump on President Obama when he endorsed same-sex marriage on Meet the Press during the re-election campaign in 2012.

Some would say he forced the President to come around on the issue. Three days after Biden’s support, Obama announced his.

But that wasn’t his first support of LGBTQ rights. In 1987, during the debate over whether to confirm Robert Bork as a Supreme Court Justice. He said, "I believe all Americans are born with certain inalienable rights. As a child of God, I believe my rights are not derived from the Constitution. My rights are not denied by any majority. My rights are because I exist. They were given to me and each of my fellow citizens by our creator, and they represent the essence of human dignity."

And while he didn’t then mention LGBTQ people, he laid the moral groundwork for his future support. As early as 1996, he voted YES to prohibit job discrimination based on sexual orientation.

In 2000 and 2002, he voted YES to add sexual orientation to the definition of hate crimes. In 2006 he voted NO on a constitutional ban of same-sex marriage. In 2007, he co-sponsored a motion re-introducing the Equal Rights Amendment.

At the 2014 HRC dinner, Biden strongly supported LGBTQ rights. He said, “It shocks the conscience that at this very moment in American history, in some states, an employer can fire you just because of who you are or who you love. It’s close to barbaric. I mean think about this -- no, I really mean this, imagine, imagine 20 years from now, as America looks back, and says, how in the hell could that have ever been allowed?”

At that dinner he applauded LGBTQ Americans for liberating not only themselves, but all Americans. He said, “My main purpose in being here tonight is to say thank you. Thank all of you. Your actions not only liberated millions, millions in the LGBT community, but here’s the point I don't think you fully understand, you liberated tens of millions of straight guys and straight women….

“Those of you who are old enough -- those of you who are old enough, 20 years ago, if four guys were sitting in a restaurant and there was a gay waiter and as he left the table, one of them made fun of it, the other three would remain silent. Not today. You freed them. You freed them to speak up because now they know -- they know they're not the exception, they know they're the majority. They know because of you.”

Even as early as 2015, Slate.com was saying Biden’s true legacy was that he was Obama’s conscience on LGBTQ rights. And in January 2016, at the World Economic Forum, he condemned anti-LGBTQ bias in many countries, saying, “LGBT people face violence, harassment, unequal treatment, mistreatment by cops, denial of health care, isolation — always in the name of culture. I’ve had it up to here with culture. I really mean it. Culture never justifies rank, raw, discrimination or violation of human rights. There is no cultural justification. None. None. None.”

We will miss Joe Biden. Or maybe we won’t. In December, when talking with some journalists, he was asked, “Are you going to run again?” And he replied, “Yeah, I am. I’m going to run in 2020.”

Biden, who would be 78 shortly after election day in 2020, was asked if he was kidding. He paused for several seconds, then replied, “I’m not committing not to run. I’m not committing to anything. I learned a long time ago fate has a strange way of intervening.”

Thank you, Joe Biden, for all you have done for LGBTQ rights. Please don’t be a stranger.