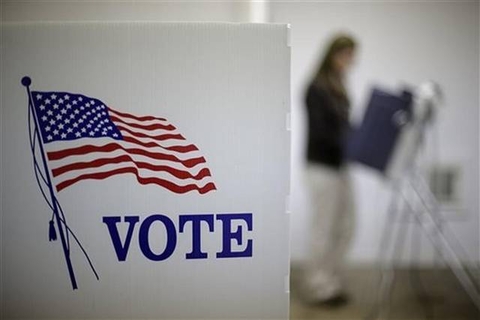 Kobach, a Kansas Republican, told the 10th Circuit Court of Appeals that the process would be administratively burdensome and involve thousands of hours of work by election officials. He's asking for a stay while he appeals the decision.

The American Civil Liberties Union, which sued on behalf of Kansas voters, is opposing the delay.

U.S. District Judge Julie Robinson issued the preliminary injunction Tuesday after finding more than 18,000 eligible voters would be disenfranchised in the upcoming federal elections under the Kansas law. She put her order on hold, but only until May 31, so the state could appeal.

Kobach argued that staying the order would allow affected individuals to still vote in the November federal election, while permitting the state to seek an expedited appeal of Robinson's decision.

He contended that if Robinson's order is not put on hold during the appeal process it will "cause great confusion and uncertainty for voters in Kansas during the 2016 election cycle."

Robinson ruled that the state's proof-of-citizenship requirements likely violate a provision in the National Voter Registration Act that requires only "minimal information" to determine a voter's eligibility for federal elections.

The judge wrote that "even if instances of noncitizens voting cause indirect voter disenfranchisement by diluting the votes of citizens, such instances pale in comparison to the number of qualified citizens who have been disenfranchised by this law."

The evidence shows only three instances in Kansas where noncitizens voted in a federal election between 1995 and 2013, and about 14 noncitizens attempted to register during that time.

The court noted the "magnitude of harm" caused by 18,372 applicants at motor vehicle offices who were denied registration due to the state's proof-of-citizenship law.

ROXANA HEGEMAN, Associated Press.
Copyright 2016 The Associated Press. All rights reserved. This material may not be published, broadcast, rewritten or redistributed.
The Gayly - 5/21/2016 @ 8:13 a.m. CDT