Kansas board decides to reject votes over citizenship rule 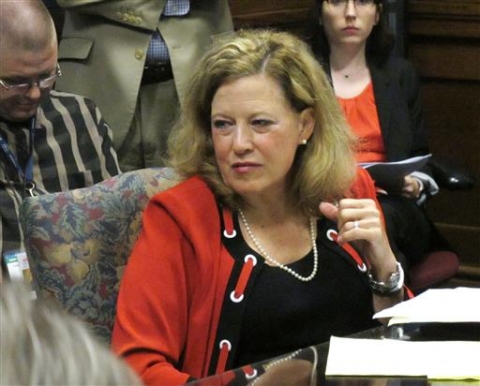 Kansas state Sen. Vicki Schmidt, R-Topeka, during a meeting of a state regulations board before it approved a temporary rule requiring county election officials to throw out votes cast by people without proof of U.S. citizenship, Tuesday, July 12, 2016. AP Photo by John Hanna.

TOPEKA, Kan. (AP) — Kansas election officials must throw out potentially thousands of votes in state and local races from people who've registered without providing proof of their U.S. citizenship under a new, temporary rule approved Tuesday by a state board.

The State Rules and Regulations Board's decision came the day before Kansas opens advance balloting for its Aug. 2 primary. The rule — sought by Secretary of State Kris Kobach — will remain in effect through Nov. 8, the date of the general election.

There is no formal process for appealing the board's decision, though critics could file a state-court challenge. Attorneys for the American Civil Liberties Union of Kansas and prospective voters affected by the rule said they were discussing their options.

The rule applies to new Kansas voters who register at state motor vehicle offices but don't comply with a 2013 state law requiring them to provide citizenship papers. About 17,000 people were in that category as of last week, but as many as 50,000 prospective voters could be affected in the November election. A Democratic lawmaker worried that close legislative races will be affected.

Under the rule, such voters will receive provisional ballots, which will be set aside at polling places to be examined later. County election officials will count their votes for president, U.S. Senate and Congress but not their votes in state and local races or local ballot questions.

"We are preserving our law and ensuring at the same time that we are complying with the federal judge's order," Kobach said in a telephone interview from Cleveland, where he was attending the GOP presidentialplatform committee meeting.

Critics of the proof-of-citizenship requirements say they suppress voter turnout — particularly among young and minority voters — far more than they combat fraud. Alabama, Arizona and Georgia have similar requirements, but Kansas has gone the farthest to enforce its law.

The Kansas law has been at the center of multiple lawsuits, including the one prompting U.S. District Judge Julie Robinson's ruling in May.

"These people are trying to interfere in a highly competitive election," Ward said after Tuesday's meeting, arguing that some primaries in state House and Senate races are likely to be decided by only a handful of votes.

Ward said people registering at motor vehicle offices should be allowed to vote in all elections.

But Kobach called the argument "absurd," saying it would cripple enforcement of a law enacted with large, bipartisan legislative majorities.

"Kansans do not want their proof-of-citizenship requirement nullified," he said.

Kansas law allows the regulations board to approve a temporary rule without a formal public hearing if an agency sees quick action as necessary to preserve "the public peace, health, safety or welfare."

Kobach, Attorney General Derek Schmidt and Gov. Sam Brownback have representatives on the five-member board, and two legislators are members; all are Republicans. The board issued a public notice of its meeting Monday afternoon and met early Tuesday morning in a conference room.

One board member, state Sen. Vicki Schmidt, of Topeka, said Kobach could have brought the proposal to legislators after Robinson ruled in May, and she abstained from voting, noting that she has a contested primary race.

Kobach noted that his office first unsuccessfully asked a federal appeals court to put Robinson's ruling on hold before drafting the rule. Then, he said, it had to be reviewed by other state officials.

Mark Johnson, a Kansas City, Kansas, attorney representing prospective voters in a second federal lawsuit before Robinson, said he didn't see the text of the temporary rule until minutes before Tuesday's meeting started. He called the process a "circus" but said without a rule, the state faced a potential "mess" in administering elections.

"You have a gun to your head," he told the board.