Kasich to Trump: 'Take some steps' on gun control 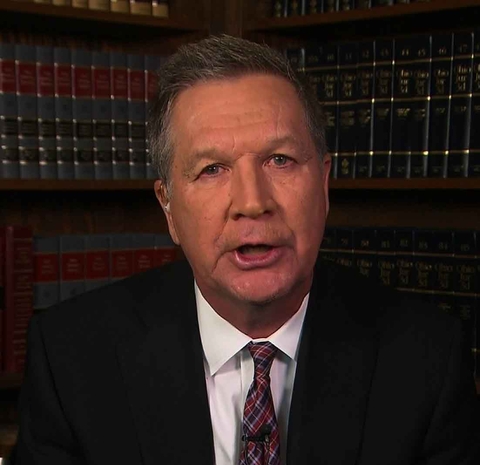 Ohio Republican Gov. John Kasich said the deadly school shooting on Wednesday should be a rallying moment for the nation on guns, but he predicted Congress would not live up to the task, and suggested the President should take the lead.

"Do I think they can do anything on guns? I hope they prove me wrong and they can because I have no confidence in them," Kasich said Sunday on CNN's "State of the Union."

"We need leadership out of the executive," he said. "This is a great opportunity for common sense steps that can be taken. ... Mr. President, I ask you to do this. You don't have to boil the ocean, but take some steps now."

Related: School shooting survivor to lawmakers: 'You need to take some action'.

Kasich said he thought it was possible to push for some measures at the state and local level, like background checks and increased attention to mental illness, while Washington would not move from the status quo.

"I'm not calling for some outright ban," Kasich said. "I'm talking about small steps that can be taken that can be effective, and the Congress ought to do it. I just don't -- I don't have any confidence in them. I don't think most Americans do."

Kasich said there were honest disagreements on the issue from people who "feel strongly" and stressed he supports the Second Amendment. Still, he tried to make the case that even ardent supporters of the Second Amendment should be open to some kind of change in policy.

"If you're a strong Second Amendment person, you need to slow down and take a look at reasonable things that can be done to answer these young people," Kasich said.

Kasich's own public stances on guns have varied throughout his political career. As highlighted in a piece during his presidential run, Kasich supported the assault weapons ban in the 1990s and earned the ire of the National Rifle Association. As governor years later, he signed legislation supported by gun rights advocates and touted his improved position with the NRA.

Last year, legislation Kasich signed went into effect that expanded where people can carry concealed handguns to include willing colleges and day-care facilities. But last November in an op-ed, Kasich called for a bipartisan approach to implement some kind of gun reform.

In the interview Sunday, he said Congress' history of inaction on the issue and the likelihood it will not address it in the wake of the recent high profile mass shooting was just one sign of broad dysfunction, citing the immigration debate as another example.

"Think about how bad it is in Congress," Kasich said. "They can't decide anything. They can't decide that a kid that was brought here at five years of age whose been here for 30 years ought to be able to say. They can't agree to anything down there."

Responds to the President's tweets

As for President Donald Trump, Kasich said he can and should lead on this, and when asked about Trump's tweet linking the FBI's failure to prevent the Florida school shooting with his complaints over the ongoing special counsel investigation into Russian interference in the 2016 election, Kasich said he disagreed.

"I think it's an absurd statement," Kasich said.