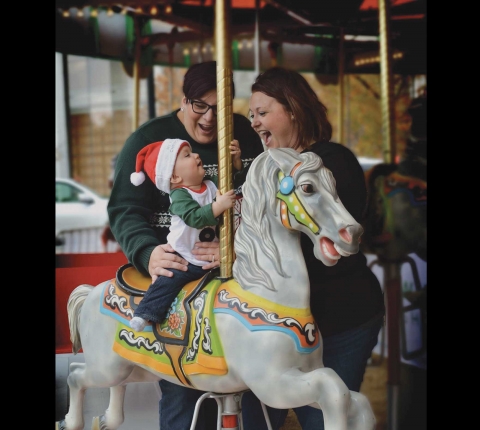 At left is adoption attorney Robyn Hopkins with her wife and their son. Photo provided.

Oklahoma City, OK – On Thursday, March 10, Oklahoma state Rep. Sally Kern’s bill HB 2428, which would have caused same-sex couples to be refused as foster care or adoptive parents, failed in the Oklahoma House of Representatives.

HB 2428, dubbed the “Child Welfare Provider Inclusion Act of 2016,” was to "prevent the state from refusing to contract with a child welfare service provider, if that provider has declined, or will decline, to provide, facilitate or refer for a child welfare service that conflicts with…the provider’s sincerely held religious beliefs or moral convictions….”

This year, similar bills have been introduced nationwide that would allow people to discriminate against the LGBT community in various ways – not just Kern’s bill, despite her denials. But all 27 of the anti-LGBT bills in Oklahoma failed last month. All of them.

Robyn Hopkins, of Hopkins Law & Associates, is an adoption attorney. Regarding Kern’s alleged attack on potential LGBT adoptive parents, she told The Gayly, “The heart of [Kern’s] bill is the same religious argument that continues to be circulated. She wants no punishment for foster care organizations unwilling to allow same sex couples to foster or adopt based off of the religious values they hold.

“Not only is she forgetting about separation of church and state, but also she is ignoring the sheer fact that there are more same-sex couples in Oklahoma willing to parent children of all ages and disabilities. Same-sex couples want to be parents – that is it! They want to earn the privilege.”

Kim Willems, who runs a number of programs for homeless LGBT youth in Oklahoma City, has a nine-year-old son with her ex-wife. She sat in on committee meetings regarding Kern’s adoption bill, and she “absolutely” believes that HB 2428 was targeting LGBT people.

“I’ve worked in mental health and with children for 20 years and I can’t think of one gay couple whose children I had to take care of in that capacity [because of bad parenting],” she says. “All the parents who have adopted have sought help for the kids because of their unusual circumstances and behaviors.”

In her case, her son suffered severe emotional and developmental problems due to his extreme abuse by his straight biological parents. In other words, “they didn’t treat him well.”

“We worked hard with professionals and have a great team of therapists. Now, in third grade, he is rockin’ and rollin’!” Willems says.

Tamera Maresh-Carver and her partner of 17 years have a child named Jackson Paul, who is also nine. She and her partner are at a stable place in their life and they are looking into adopting another.

“What Kern [was trying to do] was put us in a situation that adds an unnecessary layer to a process with enough scrutiny already,” she says about HB 2428. “We went to a psychologist to make sure we were a good enough family to adopt. To add a layer of discrimination is unneeded and really discriminatory. Everyone who adopts goes through those things, but Sally would like for agencies to accept state funds and still turn down people due to religion, and there’s already a very rigorous process. Basically, it gets in the way.

“There are kids who need homes, families who want to give them homes and legislation that stops it.”

Jackson is a happy child. So, is there any difference between same-sex parents and straight?

“Studies and scholarly research have shown that there is no difference in LGBT or hetero homes,” she responds. “Sometimes, in some LGBT homes, children do better because…well, childrearing is an accidental right [to straight couples]. Gay couples are usually a little more well-read and financially stable because we’re planning for it.”

The response given by Willems agrees. “I think the only difference is that people are looking at us so closely. Well, it’s not like I wake up thinking I have to be Super Mom today because I’m a lesbian – but there’s underlying emotions about that. There’s more pressure in public places because I know I’m going to be judged based on sexual orientation. Otherwise, no.”

A resounding “No” was also heard when speaking with Penny Ridenour, who is the founder and director of another program for homeless teens. Her program is on the verge of opening an overnight shelter for 18 to 20-year-olds. In her words, Kern’s bill would have done worse than target LGBT people.

“I think it’s targeting the children that are in need of adoption. That’s who it’s hurting, not LGBT people. She’s taking away possible families, and LGBT couples that would make great homes for kids needing to be adopted. She’s taking away options for kids themselves.”

This bill failed. But if it hadn’t, it would have reduced the number of parents capable of caring for or adopting a child, when the state of Oklahoma needs every qualified parent it can find.