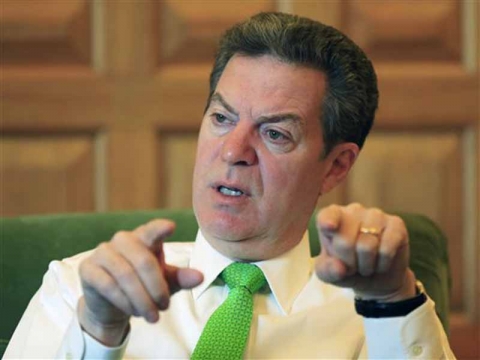 Republican Gov. Sam Brownback and legislative leaders, particularly Republicans, are big players, of course, as are influential groups and corporations.

Here are some matchups to watch.

Wagle, a Wichita Republican, is the Senate president, controls committee assignments and decides which panels consider which bills. Bruce, a Nickerson Republican, is the chamber's majority leader and sets its debate calendar. They disagreed last year over tax issues and Bruce emerged as leader of a more-conservative GOP faction as Republican lawmakers fractured over how to close the state's budget deficit. If they have fewer disagreements this year, the Legislature's work will go more smoothly.

A local hospital's financial problems led King, the Senate vice president and an Independence Republican, to call on legislators last year to consider a "state-centric" plan for expanding the Kansas Medicaid program's health care coverage for the poor. That was a significant development in a state in which GOP leaders, including King, remain strongly critical of President Barack Obama's signature federal health care overhaul, which encourages states to expand Medicaid. Merrick, the House speaker and a Stilwell Republican, remains strongly opposed to the idea. His Health and Human Services Committee chairman, Republican Rep. Dan Hawkins, of Wichita, shares his views, and Merrick in November replaced three GOP committee members who favored an expansion.

King is also the Senate Judiciary Committee's chairman. Nuss is the Kansas Supreme Court's chief justice. King is the spokesman for GOP senators who want to curb the high court's administrative power over district courts, arguing that local judges should have more say in budgeting and how the courts operate. Nuss has publicly opposed their changes, questioning the need for them as other critics argue that lawmakers are attacking the judiciary's independence. The Supreme Court last month invalidated one law reducing its administrative power, and lawmakers could seek budget cuts.

Sullivan is Brownback's budget director and a key adviser as the Republican governor drafts a plan for closing a projected shortfall of roughly $160 million in the budget for the fiscal year beginning July 1, 2016. He has argued that the gap will be closed without damaging public schools, social services and other government programs. Kelly, a state senator from Topeka, is the ranking Democrat on the Senate Ways and Means Committee and perhaps the administration's most effective critic on budget issues. She contends that under Brownback, the state is starving core programs.

Witt is executive director of Equality Kansas, the state's leading gay-rights organization and also a leading liberal, progressive voice. Pauls, a veteran Kansas House member from Hutchinson, is the new chairwoman of the chamber's Federal and State Affairs Committee, which handles social issues. Pauls is a vocal opponent of abortion and same-sex marriage who became a Republican in 2014 after an opponent backed by Witt and other gay-rights advocates nearly unseated her in a Democratic primary in 2012. Any legislation aimed at protecting opponents of gay marriage would likely go to Pauls' committee.

John Hanna. Copyright 2016 The Associated Press. All rights reserved. This material may not be published, broadcast, rewritten or redistributed.
The Gayly - 1/04/2016 @ 3:56 p.m. CST