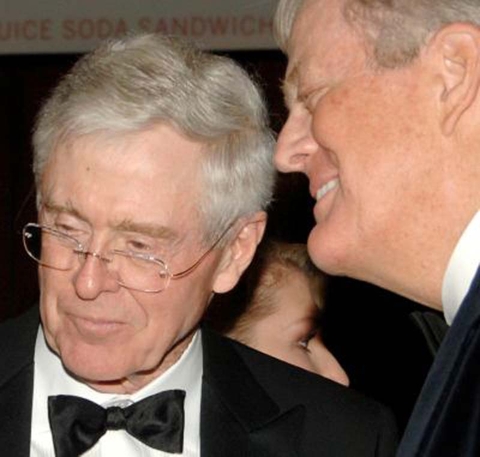 With the death of David Koch today -- and the broader retreat he and his brother made from politics since the 2016 election -- brings an end (if not the end) to one of the most influential (and controversial) chapters in modern American politics. Like them or hate them -- and almost no one feels indifferently about David and Charles Koch -- it's impossible to overlook the impact they have had on our current political culture.

Prior to the Koch brothers' entrance into the political space, which began in a major and concerted way with the founding of Americans for Prosperity in 2004, most outside groups were the equivalent of pop-up stores. They'd emerge from nowhere during the heat of an election -- usually a presidential one -- spend millions of dollars (from a handful of wealthy donors) and then disappear. From one election to the next, there was very little continuity in these groups and, as importantly, no repository for data collected or lessons learned.

What David and Charles Koch did starting in the mid-2000s was the equivalent of building not just one permanent store but an entire block of them. In this, they were helped -- mightily -- by the Citizens United Supreme Court ruling in 2010 that allowed political actors like them to spend more freely on efforts to directly advocate for their preferred policies and politics.

Rather than throwing their considerable wealth -- they are both billionaires -- at fly-by-night political operations, they built their own from scratch, with an eye not toward short-term gains but to affecting longer-term changes in the culture. So, it wasn't just a single quasi-political organization. There were think tanks to incubate libertarian ideas that the Koch favored. There were various foundations to influence public policy outside of the context of campaigns. It was a one-stop political and policy shop, a sort of shadow Republican Party but crafted in the libertarian molds of the Kochs and entirely controlled by them.

That wasn't the only thing the Koch brothers did differently. While most outside groups up until Americans for Prosperity's formation had dumped all the money they raised into TV ads, the Koch brothers instead focused far more on building grassroots infrastructures -- focusing, again, on sustainability rather than immediate success. By the 2016 election, Americans for Prosperity had state directors in 34 states, according to the New Yorker's Jane Mayer.

And while most outside groups sought to use their money to influence the presidential race and other high-profile contests, the Kochs often poured their money into far less sexy projects like influencing policy at the state legislative level (through their donations to the American Legislative Exchange Council) and winning majorities in state legislatures around the country (thanks to donations to the Republican State Leadership Committee).

The final piece that made what the Koch brothers did different -- and reshaped how we think about what outside groups can do in politics -- is their commitment to spending hundreds of millions of their own dollars on their various political and policy projects. In the 2012 campaign, the Kochs spent an estimated $400 million. They pledged to spend almost $900 million on the 2016 election but pulled back from that when Donald Trump -- a candidate far removed from the Kochs' conservative, libertarian leanings -- emerged as the GOP's nominee.

In 2018, at a Koch brothers conference, it became clear that the umbrella organization was changing its focus. "The divisiveness of this White House is causing long-term damage," Brian Hooks, a co-chair of the Koch network, told CNN. (David Koch also retired from the organization in 2018, citing ongoing health problems.)

Earlier this year, the Kochs told donors and supporters they would not involve themselves in the 2020 presidential race at all, a decision that was blasted by the Republican National Committee. "Some groups who claim to support conservatives forgo their commitment when they decide their business interests are more important than those of the country or Party," read a letter the RNC sent to its donors upon the news of the Kochs' pullback. "This is unacceptable."

In the spring, the Koch network rebranded as "Stand Together" and, in a letter to supporters, outlined the organization's changed mission. Wrote Charles Koch:

"We live in a period of unprecedented progress — economic, social, technological — but not everyone has shared in that progress. While many people have gotten ahead, too many people are falling behind. Our charge is clear: we must stand together to help every person rise In many ways, this new name already expresses who we are. ... But this new name also marks a new chapter — and a new call to action."

There's no question then that what the Koch brothers meant -- and wanted to mean -- to American civic life was changing long before David Koch's death this week. But his passing does represent in many ways the end of an era that began in 2004 and came to dominate politics, especially among Republicans, through at least 2016.

That the Koch organization can even attempt this pivot to a less political and more bipartisan stance speaks to the power of what Charles and David Koch built.

You can argue for days about what sort of influence they had on politics, but you cannot dispute that they altered -- in fundamental ways -- how and what outside groups can and do when it comes to having their day on public discourse. In that regard, what the Kochs built -- and did -- is hugely consequential.