The Latest: Trump says 'simple' to step away from business 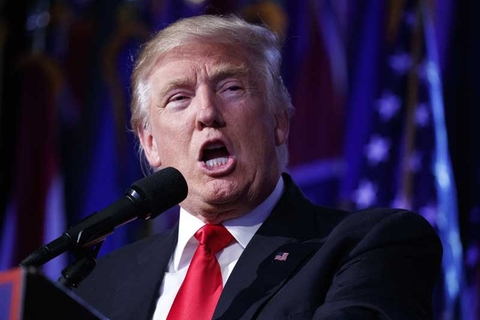 President-elect Donald Trump is again insisting that it will be "simple" to disentangle himself from his extensive international business interests. AP photo by Evan Vucci.

WASHINGTON (AP) — The Latest on President-elect Donald Trump (all times EST):
12:50 p.m.
President-elect Donald Trump is again insisting that it will be "simple" to disentangle himself from his extensive international business interests.
Trump tells reporters during a brief appearance in his Trump Tower lobby that he plans to address the topic at a press conference planned for Wednesday.
"All I can say is it's very simple, very easy," he insists.
Trump has pledged to step away from his family-owned international real estate business before taking office Jan. 20.
But he continues to own or control some 500 companies that make up the Trump Organization.
The president-elect says he'll also discuss his son-in-law Jared Kushner's planned role in his administration at the event Wednesday.
Trump spoke to reporters after meeting with French businessman Bernard Arnault, the CEO of LVMH, a luxury goods company.
___
12:40 p.m.
Donald Trump says he's planning to work with the founder of e-commerce giant Alibaba to help boost small businesses.
The president-elect met Monday with Jack Ma, the founder and executive chairman of Alibaba Group. The company claims it can create 1 million U.S. jobs by helping small businesses sell their products to China and Asian consumers.
Trump tells reporters during a brief appearance in the Trump Tower lobby the pair had "a great meeting" and called Ma a "great, great entrepreneur."
He says, "Jack and I are going to do some great things." Trump often railed against Chinese trade practice during his campaign.
Ma says the pair discussed strengthening the countries' relationship. He says Trump "has the concerns and he has the solutions and he wants to discuss with China and us that how we can do better."
__
12:15 p.m.
President-elect Donald Trump predicts all of his Cabinet picks will win Senate confirmation.
Trump made the prediction Monday as he briefly addressed reporters in Trump Tower in New York City. He appeared alongside Chinese billionaire Jack Ma.
Trump said, "I think they'll all pass." He said his nominees are "all at the highest level."
Senate confirmation hearings begin on Tuesday. Trump's pick for attorney general, Alabama Sen. Jeff Sessions, is first up.
Trump described Sessions Monday as "a high-quality man." He said, "He's going to do great."
Trump declined to answer questions about last week's intelligence report about Russian interference in the 2016 election.
___
11:55 a.m.
Senate Majority Leader Mitch McConnell says he's hopeful that a half-dozen of President-elect Donald Trump's Cabinet picks will be in place by "day one."
McConnell met with the president-elect for about an hour in New York on Monday.
He tells reporters the two "had a good meeting about the senate agenda," which included discussion of Cabinet confirmations and repealing and replacing President Barack Obama's health care law.
Democrats have complained the hearing schedule is too rushed. Some candidates haven't yet submitted ethics disclosure reports.
But McConnell insists that "everybody'll be properly vetted as they have been in the past." He adds that he's "hopeful that we'll get up to six or seven — particularly the national security team — in place on day one."
__
10:40 a.m.
Senate Majority Leader Mitch McConnell is meeting with President-elect Donald Trump a day before the Senate begins confirmation hearings on Trump's Cabinet picks.
Democrats have taken issue with the hearing schedule's quick pace.
The government ethics office says it hasn't received even draft financial disclosure reports for some of the nominees set to appear before Congress this week. Many are wealthy businessmen who have never held public office.
McConnell had demanded that Cabinet contenders complete such paperwork before their hearings back in 2009.
__
10:30 a.m.
The Kremlin says a declassified report by U.S. intelligence agencies that accuses President Vladimir Putin of meddling in last year's presidential election is baseless and "beginning to remind us of a full-fledged witch hunt."
President-elect Donald Trump also has referred to allegations of Russian hacking by the Obama administration as a "witch hunt."
Last week's report alleges that Putin ordered a hidden campaign to influence voters in favor of Trump over Democrat Hillary Clinton. The report says Russia hacked into Democrats' accounts and used state-funded propaganda and paid "trolls" to make nasty comments on social media services.
Putin spokesman Dmitry Peskov told reporters Monday that the accusations have "no substance" and that Russian officials were not involved. He added: "We are tired of such accusations. This is beginning to remind us of a full-fledged witch hunt."
___
7:38 a.m.
A top aide to Donald Trump says actress Meryl Streep should have supported the president-elect instead of denouncing him from the stage of the Golden Globes.
Kellyanne Conway told "Fox and Friends" Monday that she's "concerned that somebody with a platform like Meryl Streep's is inciting people's worst instincts."
Streep did not mention Trump by name. But she criticized the president-elect's "performance" as a presidential candidate, especially his apparent mocking of a disabled New York Times reporter during the campaign. Trump has denied that. He fired back on Twitter that Streep, who backed Democrat Hillary Clinton, is an "over-rated" actress.
Conway said of Streep: "I really wish she would have stood up last night and said, 'I didn't like the election results but he is our president and we're going to support him.'"
___
7:35 a.m.
Donald Trump and his Cabinet picks are preparing to face public questioning over their business conflicts, their approach to Russia and other issues during a critical week of confirmation hearings and the president-elect's first news conference in nearly six months.
Trump is less than two weeks away from taking office, but has yet to lay out how he intends to disengage himself from his global business interests. Despite the pressure, Trump also plunged Monday in to another fight with a high-profile critic, this time in a three-part tweet responding to actress Meryl Streep's denunciation of him from the stage of the Golden Globe awards.
Trump called the Academy Award winner who had supported Democrat Hillary Clinton "one of the most over-rated actresses in Hollywood" and "a Hillary flunky who lost big."