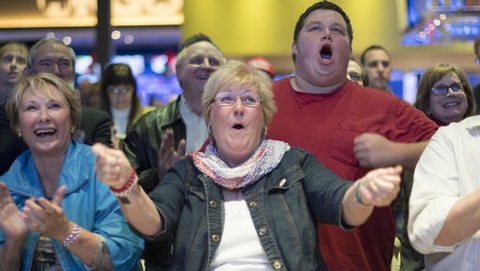 Once again, Oklahoma went all in for the Republican in a presidential contest, with Donald Trump winning all 77 counties in the state.

Trump performed best in western Oklahoma and the Panhandle. His greatest support came in Cimarron and Beaver counties in the Panhandle, where about 89 percent of voters favored Trump.

A Democratic candidate for president hasn't won Oklahoma since Lyndon Johnson in 1964, and President Barack Obama failed to win a single one of the state's 77 counties in 2008 and 2012.

With Donald Trump at the top of the ticket, the Republican Party steamrolled to a massive win in Oklahoma on Election Day, delivering the state's seven electoral votes to the GOP presidential nominee, winning all of the congressional seats on the ballot and increasing the party's majorities in the Legislature to historic levels.

Oklahoma voters also rejected a 1 percent sales tax to help fund teacher pay raises and enshrined the death penalty in the state constitution, making it more difficult for the Legislature or the courts to stop the state from executing condemned inmates.

With nearly all precincts reporting unofficial results, Lankford won a full six-year term to the U.S. Senate with nearly 68 percent of the vote, defeating a Democrat, a Libertarian and two independents.