The latest on Trump's border wall 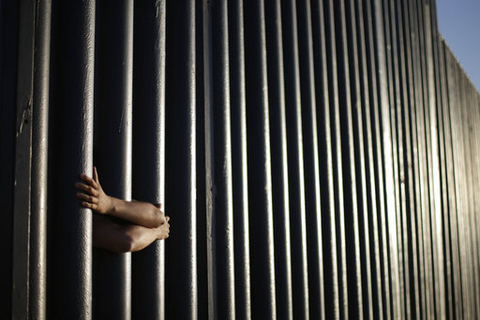 Hands from Daniel Zambrano of Tijuana, Mexico, hold on to the bars that make up the border wall separating the U.S. and Mexico. AP Photo/Gregory Bull, File.

Despite President Donald Trump's enthusiasm, border wall plans will be getting pushed back until the next fiscal year.

According to an article published by the Los Angeles Times, House and Senate negotiators have been working nonstop on a compromise to fund the government for the remainder of the 2017 fiscal year by Friday’s deadline.

Democrats want assurances that Trump won’t yank funding for subsidies to help some Americans afford healthcare under the Affordable Care Act, as he has suggested.

And both Democrats and Republicans are trying to salvage a coal miners' pension fund that tanked during the Great Recession and now is at risk of going insolvent unless the government intervenes.

Republicans, meanwhile, are seeking to boost defense spending Trump has requested, and have also tried to include anti-abortion measures – including the Abortion Non-Discrimination Act, which would prohibit public agencies that receive federal funds from blocking healthcare facilities or doctors who refuse abortion services.

Trump wanted $34 billion for the military, but talks now appear to be focusing on about half that amount, about $15 billion, sources said.

Instead of the wall money, the final deal will likely include about $1 billion for other security measures -- possibly surveillance -- on the border.

Yet, according to the Associated Press, Trump is still committed to building his promised wall along the Southern border.

But Trump is refusing to say whether he's willing to force a government shutdown at the end of the week by insisting money for his wall be included in a must-pass spending bill.

The president tells reporters, "The wall's gonna get built." He says, "It's going to have a huge impact on human trafficking."

He says he expects construction to start "soon."

Meanwhile, Congress lawmakers seem less than pleased to risk a shutdown over footing the bill for Trump's wall, which a recent report stated could end up costing over $70 billion

Trump spokesman, however, states that the building of the wall remains one of the president's top priorities.
_